by Kiera Pritchard Comment on Night Terrors vs. Nightmares 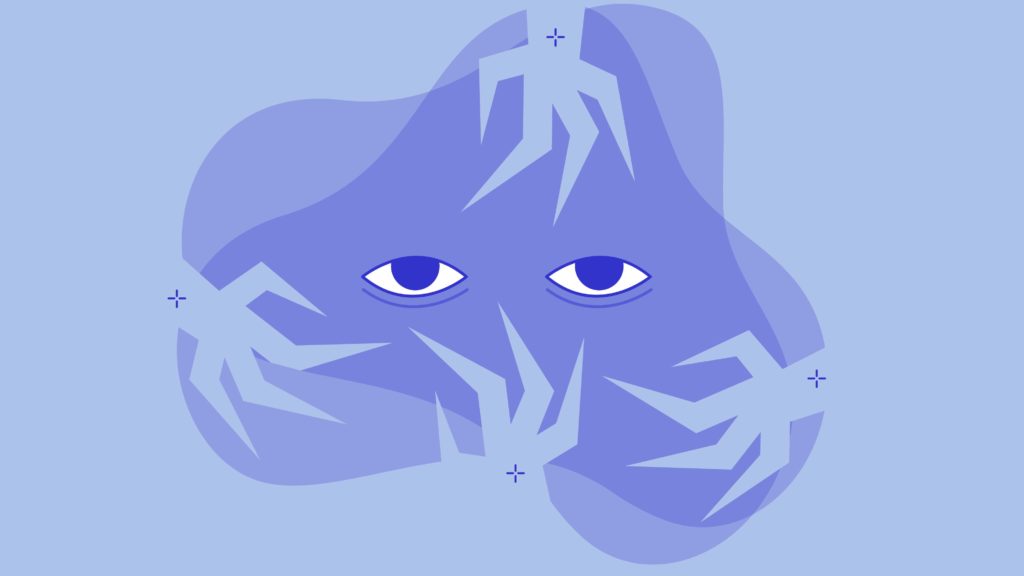 Night terrors and nightmares can be frightening occurrences, but the two are very different from each other, despite their similar characteristics.

Nightmares are disturbing dreams we can often recall upon waking. Night terrors, on the other hand, are sleep disruptions that happen during NREM Stage 3 and start with partial arousal. They seem similar to nightmares because they’re associated with fear. But unlike nightmares, they’re usually accompanied by yelling, kicking, and heavy breathing, and many people often don’t remember having a night terror.

In this article, we’re discussing what exactly nightmares and night terrors are, their causes and symptoms, and how best to cope with them. We’ll also compare the two in order to help you spot the differences when they happen.

A nightmare is a disturbing, vivid dream that usually includes physiological activation and/or unpleasant feelings that often wake you up. Nightmares typically occur in the second half of the night during REM sleep when our brain waves are very active. People are often able to recall some or all of their nightmares, though others may not remember the specific details.

Nightmares are most common in young children and can begin as early as age three. They tend to decrease at the age of 10, but can occur at any age and be common among adults.

Causes and Symptoms of Nightmares

Elements of nightmares often include anxiety, fear, grief, disgust, and anger. Common themes include threats to survival, security, or physical integrity. Usually, nightmares seem very real and become more disturbing as they unfold. Many times, people having a nightmare will be woken up from it and have a hard time falling back asleep.

Common symptoms of nightmares include:

Occasional nightmares are nothing to worry about, and the exact cause for them is unknown. However, nightmares can be triggered by things like stress and anxiety, trauma, sleep deprivation, as well as scary books and movies. Nightmares can also happen alongside sleep and mental health disorders, and some medical conditions. They are more common in people with family members that have a history of nightmares or parasomnias like sleep paralysis or night terrors. Parasomnias are defined as disorders with undesirable behaviors or experiences that occur during sleep or during partial arousals from sleep.

How to Cope With Nightmares

Nightmares are not generally anything to be concerned about. If they occur frequently, routinely disrupt sleep, create fear of going to sleep, or cause behavioral problems during the day, we suggest consulting with a doctor. It’s important to note that there are two types of sleep disorders. Insomnia belongs to the class known as dyssomnias. Nightmares and sleep terrors belong to the class known as parasomnias.

To help prevent nightmares, avoid disturbing movies and books prior to bedtime, make sure you’re getting enough sleep, and learn to properly manage stress and anxiety. According to the sleep expert, Dr. Colleen Ehrnstrom, “If you are an adult struggling with nightmares, you can talk to your providers about using an effective behavioral program called Image Rehearsal Therapy (IRT).”

What Are Night Terrors?

Night terrors are episodes during your sleep of intense fear caused by an over-arousal of the central nervous system. They are often accompanied by screaming, flailing, and even sleepwalking. They usually begin with what appears to be a partial arousal from sleep, like a scream or shout. Oftentimes, someone experiencing a night terror may look like they’re awake even though they’re still asleep. They may sit up in bed with eyes wide open and appear to be frightened or exhibit aggressive behavior.

Sometimes called sleep terrors, night terrors are classified as a parasomnia. Night terrors generally occur during the first third of the night because they happen during NREM Stage 3 (prior to 2020, this was known as Stage 3-4), the stage when we experience our deepest sleep.

Night terrors are most common in children, affecting nearly 40 percent of young kids. While many people outgrow night terrors by their teenage years, they can still occur from time to time in adults.

Causes and Symptoms of Night Terrors

People experiencing night terrors are very hard to wake up and are often confused and inconsolable if they are. Generally, after a night terror plays out, the person falls back asleep and won’t remember the event when they wake up.

Common symptoms of someone experiencing a night terror include:

Night terrors can be caused by a number of factors affecting sleep like sleep deprivation, stress, sleep schedule disruptions, and fevers. They can also be triggered by underlying conditions like sleep-disordered breathing, Restless Legs Syndrome, and mood disorders. Night terrors are more common in those with family members who have a history of sleepwalking or night terrors.

How to Cope With Night Terrors

Occasional night terrors are not typically harmful to the sleeper, and since most people grow out of them, they often aren’t a cause for concern. However, according to the Mayo Clinic, you should consult a doctor if night terrors become more frequent, disrupt the sleep of you or others, lead to safety concerns or injury, cause excessive sleepiness or problems functioning during the daytime, or continue beyond teen years into adulthood.

If you witness someone having a night terror, it’s best to not try and wake them up. Interfering can make the night terror worse or even prolong the episode. Staying calm and letting the night terror play itself out is the best thing you can do for someone experiencing parasomnia.

That said, do ensure the sleeper remains safe from injury by gently restraining them if they attempt to get out of bed. If they do, gently guide them back to bed and keep them away from stairs, walls, and windows.

To prevent night terrors, especially in children, keep a regular sleep schedule, make sure the child is not excessively tired, and reduce their stress levels by engaging in relaxing activities before bedtime. Dr. Ehrnstrom notes, “There can also be some benefit to briefly waking your child approximately 15-30 minutes before the night terrors typically occur.” 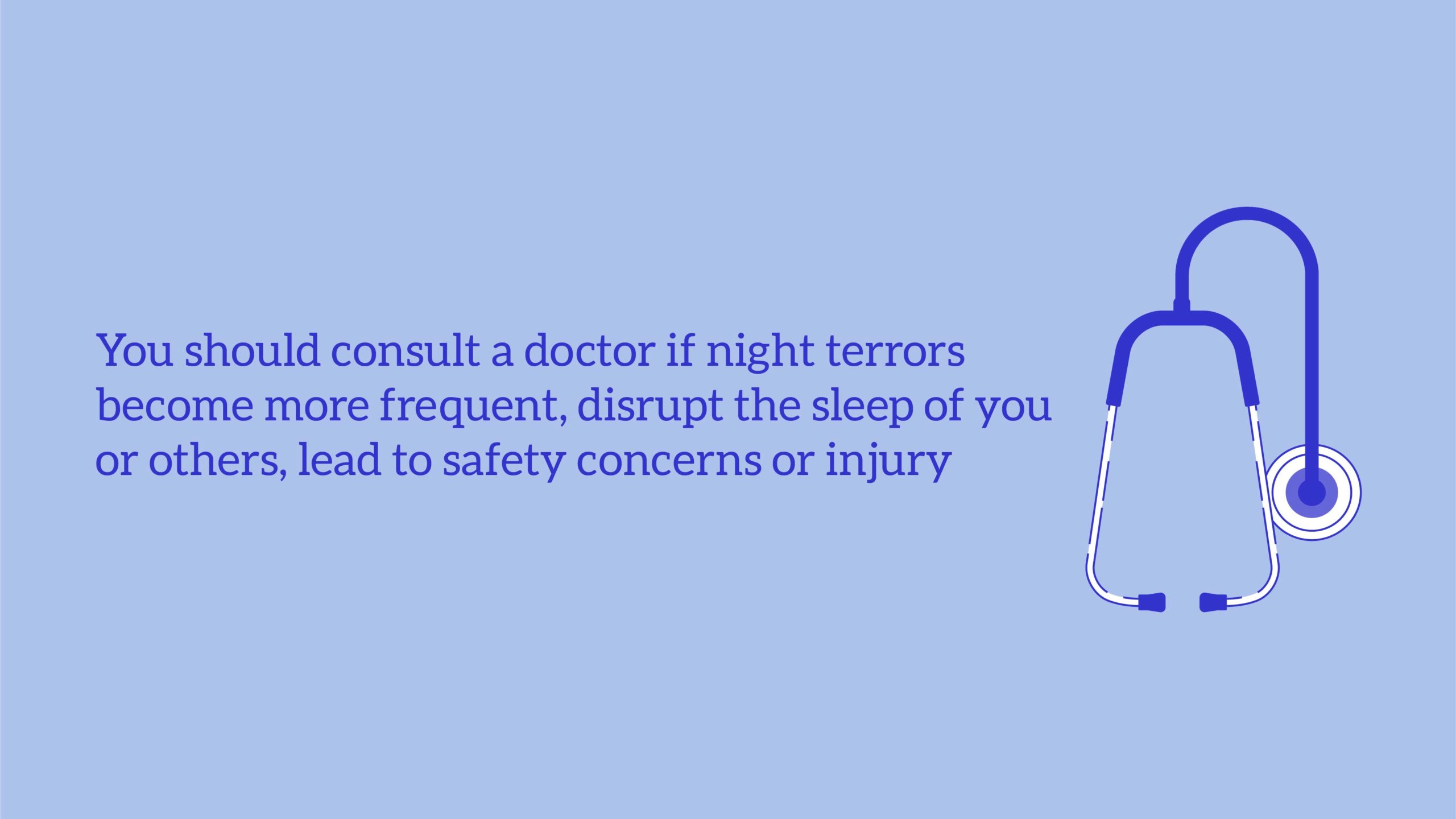 The Differences Between Nightmares and Night Terrors

Nightmares and night terrors are often confused. However, the differences between the two, like when they occur and their effects, are easy to see.

The exact cause of nightmares is not clear, but there are multiple factors that have been shown to trigger them. Stress and anxiety, especially related to a big life change like moving, or death of a loved one, can trigger nightmares. Other things that can increase the risk of nightmares include traumatic events, scary books and movies, insomnia, and sleep deprivation.

When do night terrors occur?

Night terrors usually occur during the first third of sleep, in the deepest stage of non-rapid eye movement, NREM Stage 3. This stage of sleep is when we experience slow-wave sleep.

Adults can experience night terrors, but it is not very common. Generally, night terrors are most likely to occur in younger children, and most people will outgrow them by their teenage years.

If you’re experiencing frequent night terrors beyond your teen years, we suggest talking with your doctor about your concerns. Sleep terrors aren’t typically harmful, but when severe, they can cause complications like excessive sleepiness, embarrassment, disturbed sleep, or even injury.

How do I wake someone from a night terror?

It’s not recommended that you try to wake someone up who is experiencing a night terror. While it can be upsetting to witness, it’s best to wait it out. Interfering may cause the night terror to worsen or last longer. Night terrors are not harmful as long as the person experiencing it is safe from potential injury.

Why are night terrors more common in children?

Night terrors can be caused by an over-arousal of the central nervous system. Developing brains are more susceptible to becoming overstimulated with new information and experiences, putting children at a higher risk of experiencing night terrors. Other factors that affect young brains, like stress and being overtired, have also been shown to increase the risk of night terrors.

Night terrors and nightmares are both disturbing sleep events that are especially common in children but can also occur in adults. Though the two seem similar, they have unique symptoms and happen at different times during the night.

Night terrors are very intense episodes occurring during the first third of sleep in NREM Stage 3. Those experiencing night terrors will exhibit symptoms of being awake, like screaming and staring with eyes wide open, even though they are still asleep. Nightmares, on the other hand, are vivid and disturbing dreams that often awaken you from sleep. They usually take place during the second half of sleep during REM. People can usually recall the details of their nightmares, or at least remember having one; however, most people do not remember night terrors at all.

Nightmares and night terrors are usually harmless and nothing to be concerned about. However, if they become more frequent, disrupt sleep, negatively affect daytime behavior, or become common during adult years, you should consult a doctor. An underlying condition or severe stress and anxiety can be triggers to nightmares and night terrors and it’s important to treat these causes. 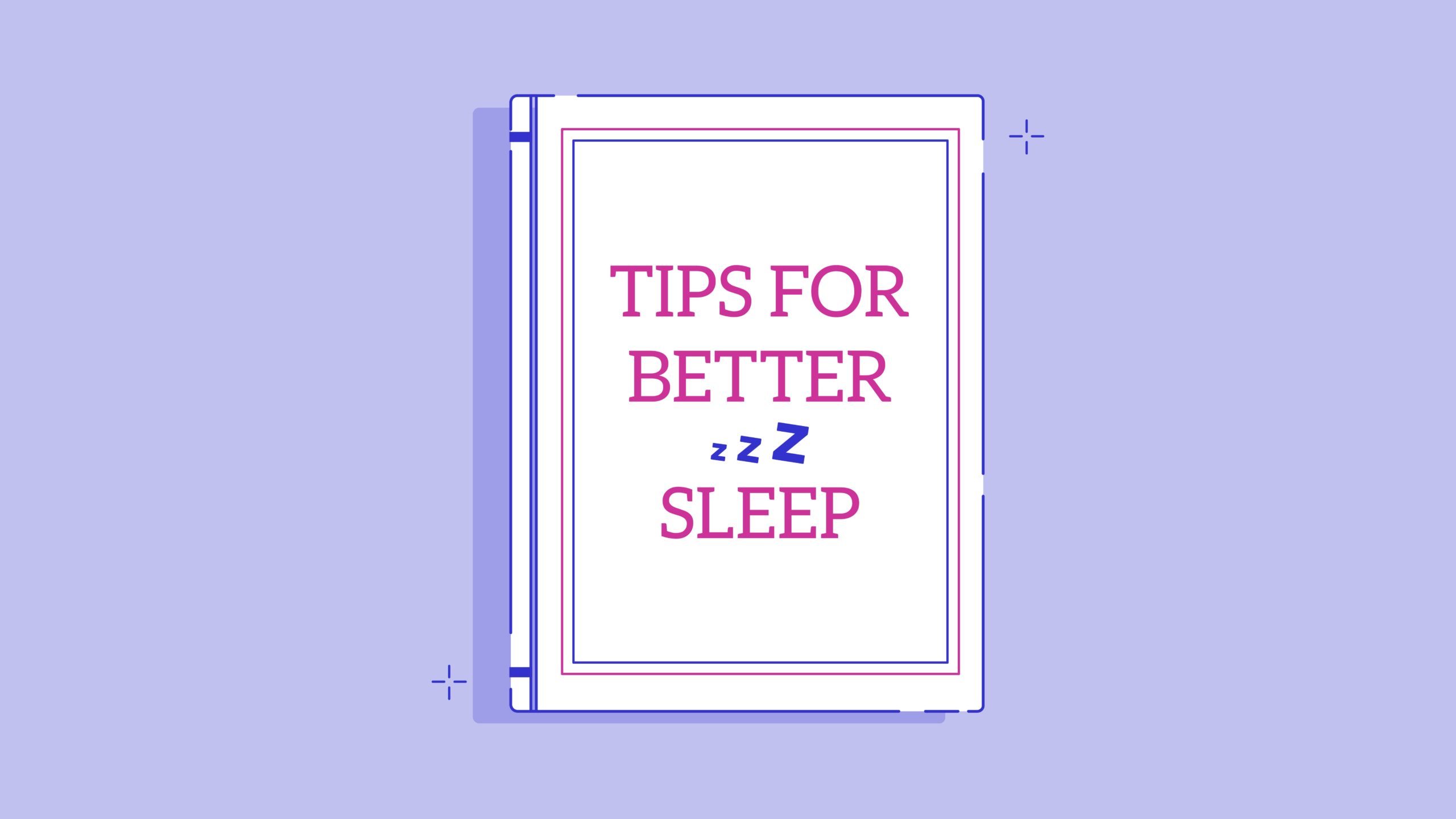 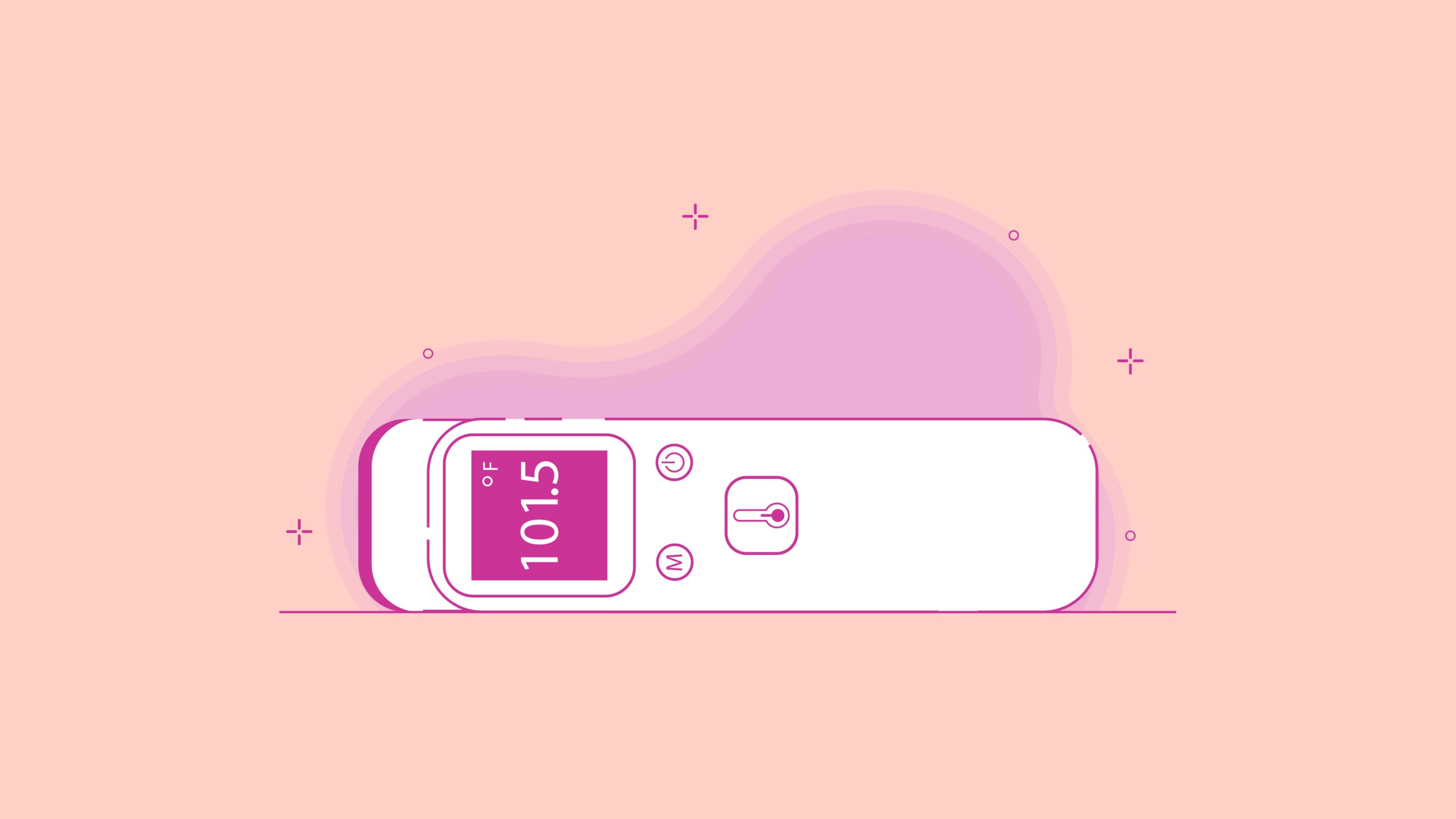 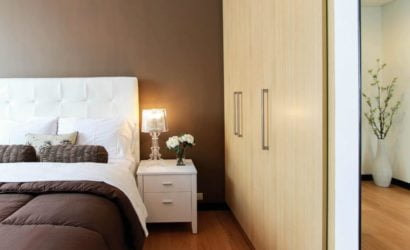 Healthcare Worker's Sleep During COVID-19 Pandemic In The U.S.