Why Do People Sleep So Much?

by Andrea Strand Comment on Why Do People Sleep So Much?
Updated May 20, 2020

Getting the right amount of sleep is crucial for general health. Sleep deprivation is certainly not desirable. But oversleeping — or hypersomnia — can also be problematic. It can both cause and be caused by underlying health problems.

Here, we’ll explore the causes and results of excessive sleepiness and determine why people sleep so much. 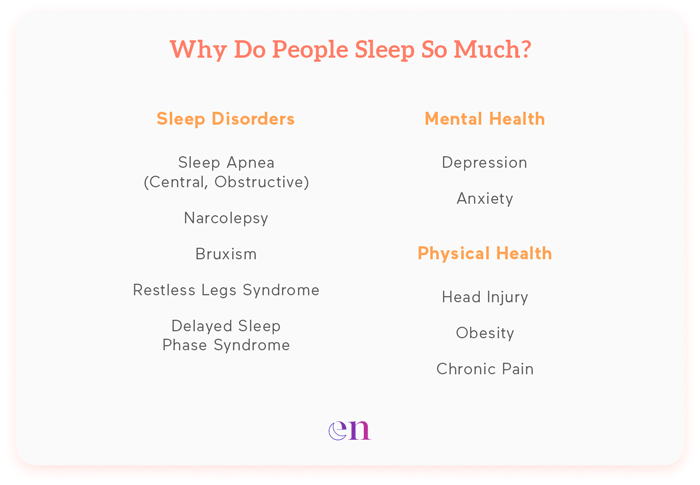 Answers May Lie in Health Problems

Certain health conditions can cause a person to sleep too much. In fact, a wide variety of health issues may cause this problem.

Sleep disorders can be a major cause of excessive sleeping because they can disrupt a person’s natural sleep cycle. This disruption can leave people feeling tired and sluggish due to a lack of quality sleep.

Sleep apnea is a disorder that affects more than 20 million Americans. There are two kinds: central and obstructive sleep apnea.

Both types of sleep apnea can lead to a decline in sleep quality. This can leave a person feeling tired and unrested the next day.

There is no known cure for narcolepsy. But behavioral and medicinal treatments are available.

Sleep bruxism is a condition that causes sufferers to grind their teeth during sleep. In severe cases, it can lead to dental injury as well as headaches. The causes can vary from person to person, but stress is closely associated with bruxism.

These sensations tend to begin after rest has begun. Consequently, they can lead to a decline in sleep quality or prevent sleep altogether.

The causes of DSPS are not well understood. However, those with DSPS and an early work schedule can find themselves constantly tired due to a lack of sleep. This may lead to oversleeping on weekends to make up for a sleep deficit — and thus struggling to wake up on the weekends.

Mental health issues can lead to oversleeping as well. In fact, mental health problems are closely linked with hypersomnia.

Depression and sleep disruption are often linked. In many cases, they appear to present a chicken or the egg scenario: Which one came first?

Disrupted sleep due to depression can lead to excessive daytime sleepiness. Additionally, some medications used to treat depression can exacerbate sleep disruption.

Research shows between one-fourth to half of all people who suffer from hypersomnia also suffer from anxiety. The exact mechanisms that link the two are unknown.

However, the stress caused by anxiety can lead to poor quality sleep. This can lead to a sleep deficit. Some anxiety medications can increase sleepiness, similar to depression medications.

Certain physical health problems can lead to hypersomnia. If you feel you suffer from any of these, consult your doctor.

Hypersomnia can result from a brain injury — even a minor one. Sleep disturbances have been noted in 30-70% of people who have suffered brain injuries. In general, a brain injury can lead to excessive sleepiness as well as an increase in other sleep disorders such as sleep apnea.

Obesity and hypersomnia are closely linked. Researchers note that obesity and depression are the two conditions most often associated with daytime sleepiness. The exact underlying causes are unknown, but the link is clear.

Obesity is commonly associated with sleep apnea. Combined, the two can lead to lowered energy levels and a desire for more sleep.

Chronic pain can lead to a variety of sleep disturbances, including hypersomnia. In general, chronic pain degrades a person’s quality of sleep and can leave them with a long-term sleep deficit. This may cause sufferers to sleep more than normal in an attempt to cope.

How Much Sleep Is Too Much?

Everyone has different sleep needs. Generally speaking, 7-9 hours of sleep each night is recommended. More than 9 hours of sleep is too much if it’s a person’s regular pattern.

The traditional sleep duration of 7-8 hours is enough for the average person. But there are exceptions. Some people naturally need more sleep than others. Other people, like athletes, need more sleep due to their high activity levels.

Sleeping more than normal once in a while is not cause for alarm. However, consistently sleeping too much can lead to numerous health problems.

Hypersomnia is associated with an increased risk of heart disease. Research indicates hypersomnia itself doesn’t directly cause heart disease. Rather, it causes metabolic and other health problems. These issues may eventually lead to a higher risk of stroke and cardiovascular disease.

Type 2 diabetes is associated with numerous sleep disturbances, including hypersomnia. It can also lead to an increased risk of sleep apnea and restless legs syndrome.

Diabetes also causes people to urinate often when their blood sugar is high. This can make people wake up during the night, leading to disrupted sleep patterns potentially including oversleeping.

Maintaining a healthy weight can help prevent diabetes and any associated sleep disturbances.

In general, too much sleep is not a good sign. As noted above, sleeping more than 9 hours regularly is potentially a sign of underlying health problems. It can also lead to further health problems. Whatever the case, it’s not normal or healthy for most people to sleep 12 hours a day.

Just like sleeping too much, getting too little sleep can also lead to health problems. Again, we’re only discussing sleep habits. If a person sleeps 5 hours one night, but they normally get enough, one day of less sleep is not detrimental to long-term health. But it does make motor tasks like driving more difficult.

If you’re averaging 5 hours of sleep a night, try your best to allow more time for sleep. Or, question and address why you don’t sleep for longer periods.

Can getting too much sleep make you tired?

It seems so. Getting too much sleep can disrupt the body’s circadian rhythm and decrease your energy levels. This leads to an increased desire for sleep, which may, in turn, lead to a negative feedback loop.

Can sleeping too much make you gain weight?

How can I stop sleeping too much?

If you feel you’re taking too many daytime naps or just sleeping longer than necessary at night, we suggest removing distractions from your bedroom and making nighttime sleep a priority. Set a consistent bedtime and wake-up time and stick to your schedule as best as you can. It also helps to exercise at least 30 minutes a day to tire your body out and promote overall better health.

Tips to Get Better Sleep

Getting too much sleep is not only relatively unhealthy, but it takes time away from other important day-to-day tasks. When you do sleep, you want to ensure the time spent resting actually restores your body and readies you for the day ahead. Getting 9 hours of sleep, and 9 hours of good sleep are two different things. Let’s talk about the best tips for better sleep so you can wake up feeling rested and ready to take on the day.

So, Why Am I Sleeping So Much?

Getting the right amount of sleep is crucial for a number of key biological functions. Healthy sleep leads to a healthy mind and body, while sleep disturbances can lead to a host of health problems. Learning how to manage your sleep can lead to a significant increase in quality of life.

The science of sleep, as well as sleep’s importance, is gaining traction in both the medical field and society in general. Although everyone is wired differently, there are healthy parameters people tend to fall in. When we’re well-rested, we’re healthier, happier, and more energetic.

Sleeping too much can be a sign of underlying health problems. If you’re concerned about any of these problems, consult your doctor. 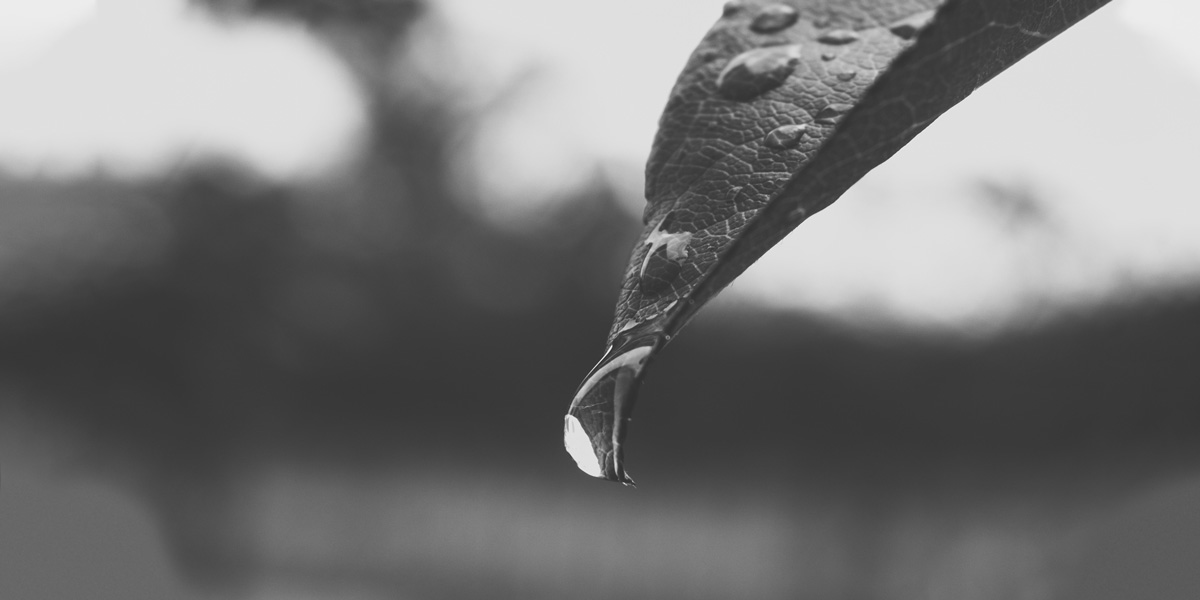 Why Do People Drool When They Sleep?

How to Fall Asleep in Under 5 Minutes