Entrepreneurial Slumber: Exploring the Interaction of Sleep and Self-Employment

The term “work-life balance” has evolved with different generations of workers but largely points to a flexible work environment and a more positive workplace experience.

For a more in-depth look at how people in different work environments – entrepreneurs, employees, and freelancers – enjoy life, we surveyed over 1,000 people about their work-life balance. Read on as we dissect how an emphasis on life and health over a career may affect sleep and finances, how many weekly hours people work based on their employment, and more. 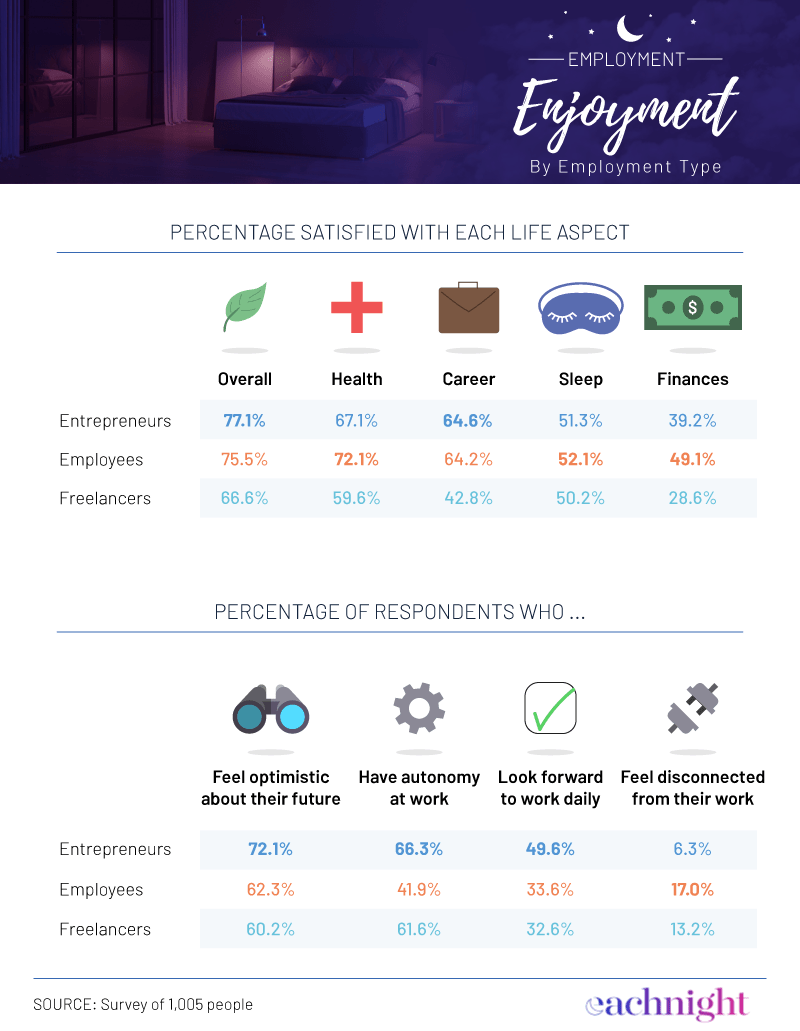 Between 2014 and 2018, roughly 3.7 million Americans became full-time freelancers. And it’s estimated that nearly 57 million Americans participate in the gig economy. With an emphasis on flexibility and freedom to work when, where, and how freelancers choose, the “gig economy” has been compared to an industrial revolution. Today, 1 in 5 available jobs are freelance and may grow to half of all jobs by 2023.

In contrast, when asked about their life (77%) and career (about 65%) satisfaction, entrepreneurs had the highest rate of satisfaction, while employees were the most likely to be satisfied with their health (72%), sleep (52%), and finances (49%).

Employees might be happier outside of work, but the time they spend at the office could be a real drag. With the least sense of autonomy over their work (42%) and the highest likelihood of feeling disconnected from their work, employees were nearly 10 percentage points less likely than entrepreneurs to feel optimistic about their future. However, freelancers were the least likely to feel optimistic about their future (60%). 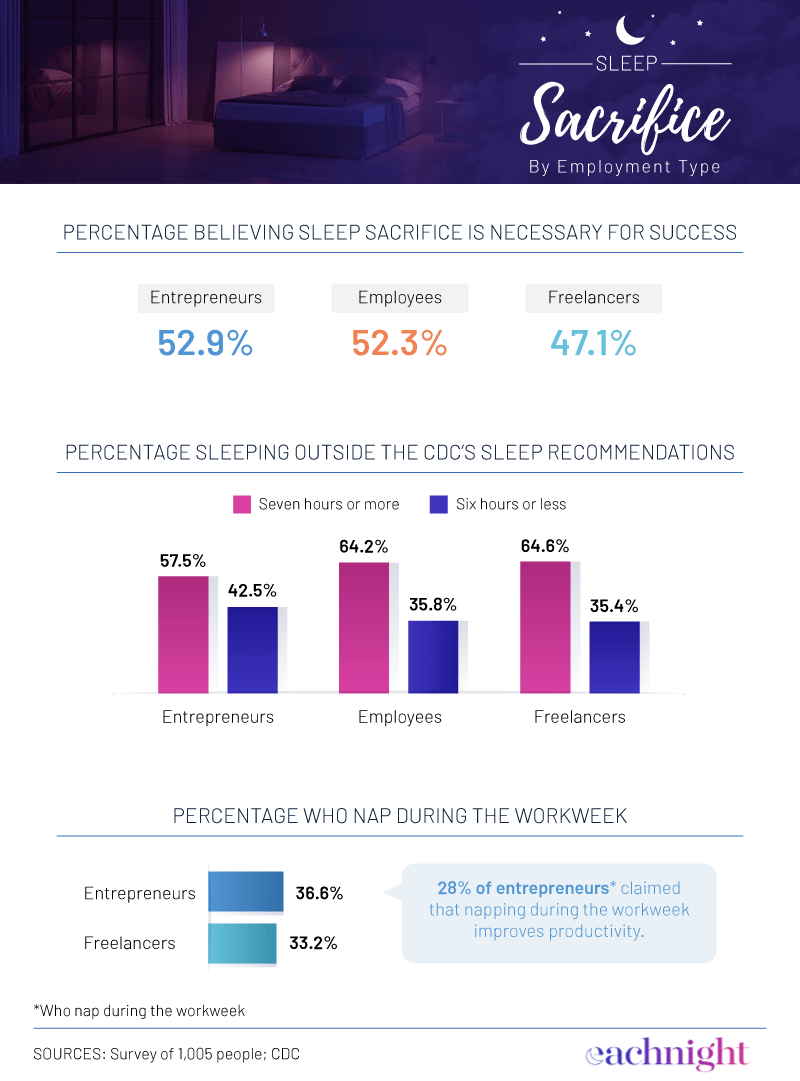 Regardless of the work you do, the amount of sleep you get at night is imperative to productivity and success. And research shows that people who feel drowsy at work are more likely to underperform. People who work extended hours (more than 50 hours a week) or juggle multiple jobs are more prone to sleep loss as a result of their employment.

More than half of entrepreneurs (53%) and employees (52%) and slightly fewer freelancers (47%) said sacrificing sleep was necessary for their success. In addition to being the most likely to give up sleep for the benefit of their work, entrepreneurs were the least likely to clock in at least seven hours of sleep every night (almost 58%). 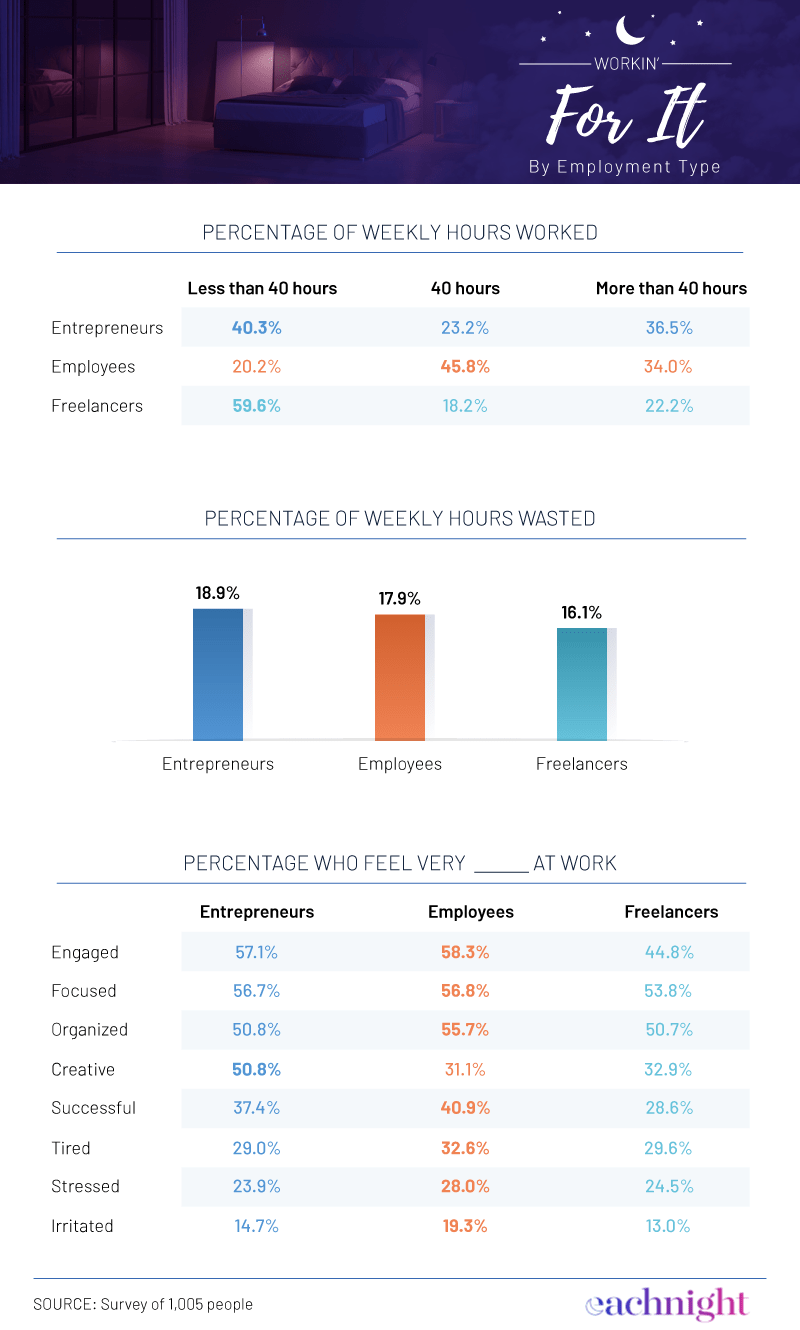 Today, more than 1 in 5 full-time employees work more than 60 hours a week, and around half work at least 50 hours. Unfortunately, studies show overall productivity is greatly diminished after a person works more than 50 hours a week and even more so after 55 hours spent working.

Employees were the most likely to feel tired (33%) and stressed (28%) but were also more engaged (58%), focused (57%), organized (56%), and successful (41%). On the other hand, freelancers were the least irritated by their work but were also less engaged, focused, and significantly less successful compared to the other respondents. 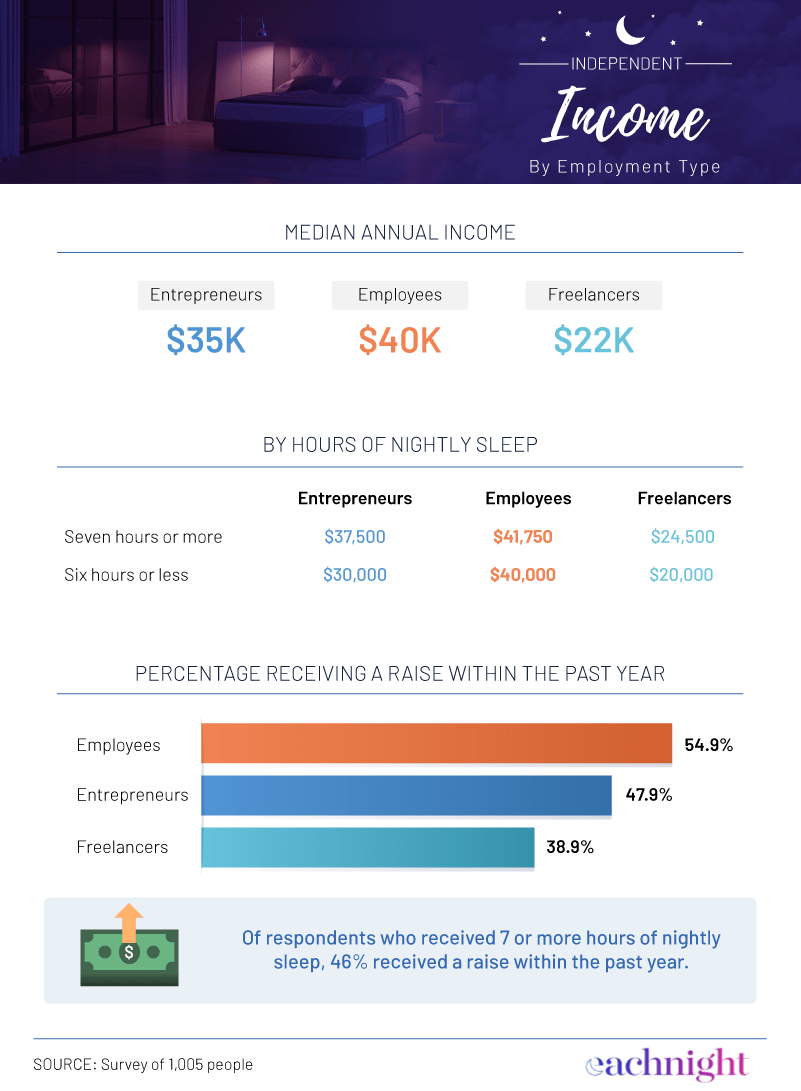 Freelancing may seem like the best of both worlds. With the flexibility to build your own schedule, pick your clients, and work from basically anywhere (as long as you have Internet and a computer), freelancing can seem like a fantasy. But there’s plenty to be stressed about in this rapidly growing field. With less ability to take time away from work, no support or collaboration, and minimal financial consistency, freelancing may not be for everyone, even if the opportunities seem readily available. 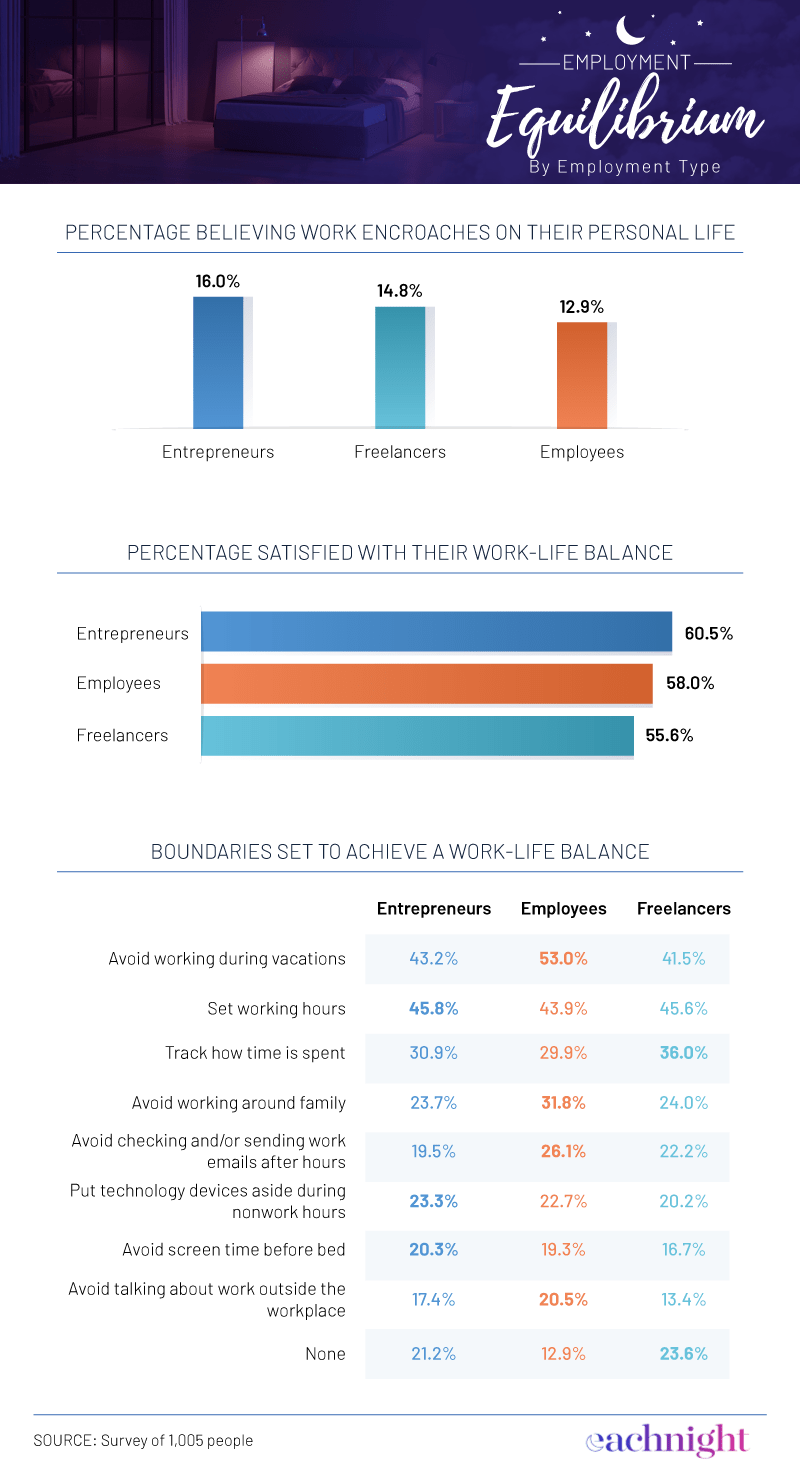 For entrepreneurs and freelancers, setting boundaries might be more difficult than for employees. Freelancers were more likely to work during their vacations (less than 42% avoided it) and talk about their work outside of working hours (only 13% abstained). Not only did nearly 1 in 4 freelancers not set boundaries between their work and personal life, but they were also the least likely to avoid screen time before bed, a known detractor to quality sleep. Fewer than 24 percent of entrepreneurs acknowledged they avoided working around their families, lower than either freelancers or regular employees.

If you work as an employee, you may be less excited about work but earn higher compensation. As an entrepreneur, you may find you get less sleep but feel more satisfaction about the work you do. And while freelancing might seem like it can strike the perfect work-life balance, you may earn less than other types of employment and struggle to set appropriate boundaries.

No matter the work you do, though, one thing is certain: sleep is crucial to success. At eachnight, we’re committed to providing the best resources to create a healthy and well-balanced life. From the science and research of sleep, to curating the best mattress guides, you’ll never have to guess about your quality of sleep again. Whether you’re looking for a new memory foam mattress or accessories to upgrade your current bed set, we’ve got you covered.

These data rely on self-reporting, and statistical testing has not been performed. The data are intended to be used for entertainment purposes only. Potential issues with self-reported data include but are not limited to the following: exaggeration, selective memory, and attribution errors on the part of respondents.

Don’t sleep on these study results. You don’t have to put in extra hours to share the results of our analysis with your readers for any noncommercial purposes. Just include a link back to this page as credit to our team, and you’re in the clear. 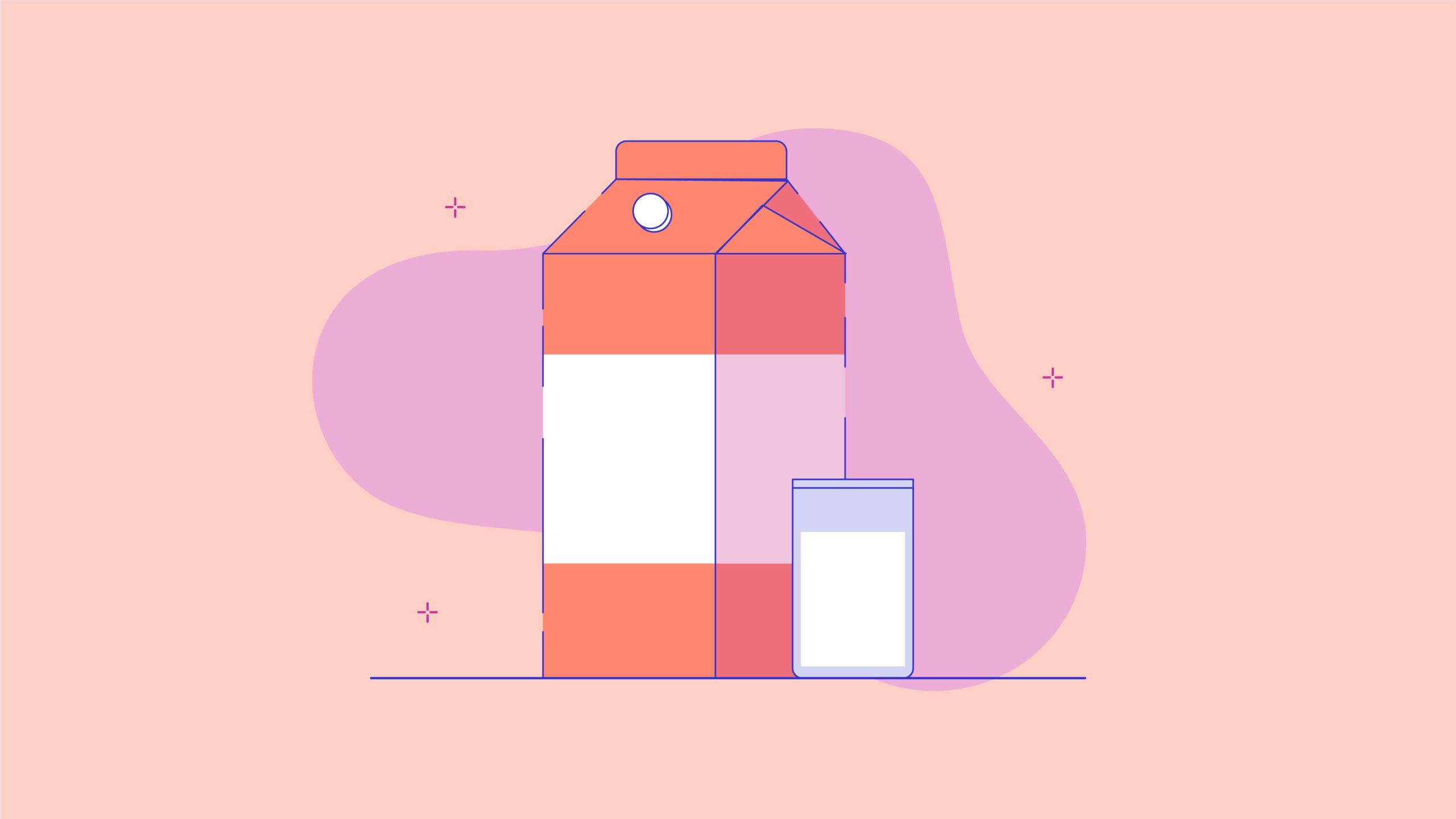 Will Drinking Warm Milk Make You Go to Sleep? 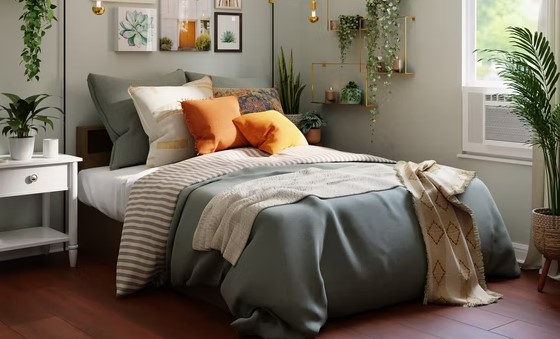 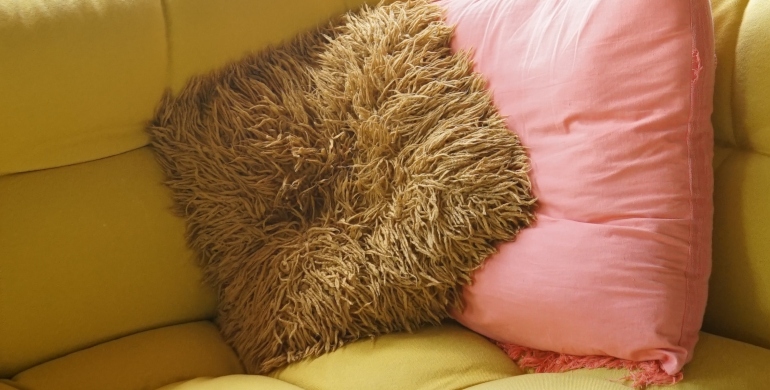