by Andrea Strand Comment on 5 Benefits of School Starting Later 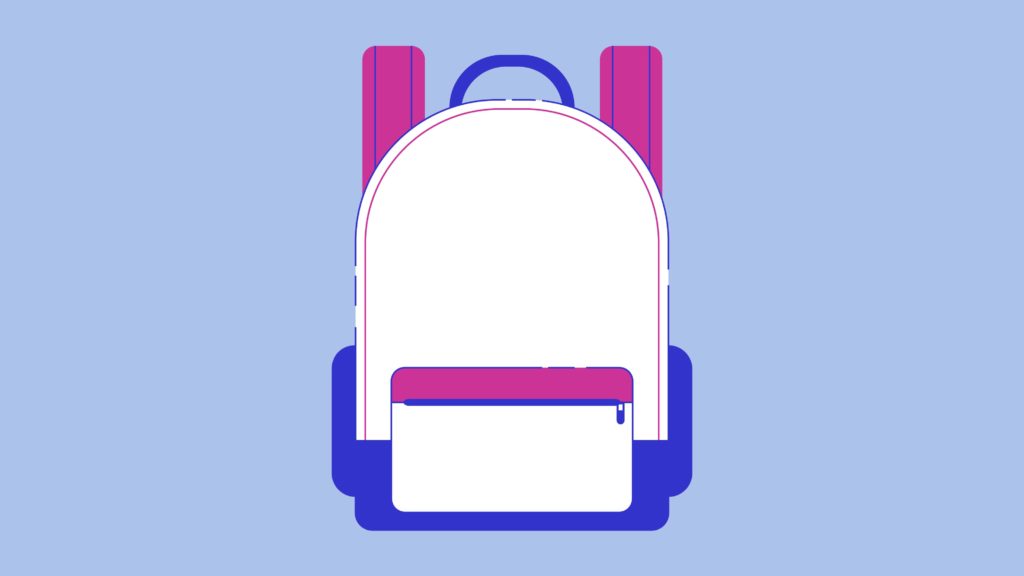 Students have busy schedules and an increasing number of demands being placed on them nowadays; between school, homework, extracurricular activities, part-time jobs, and maintaining a social life, getting enough rest is crucial for keeping up with it all. And yet, many students have to be up and at em’ before the sun even rises to be at school on time.

Waking up while it’s still dark outside can be very disruptive to an adolescent’s natural internal clock. This begs the question—why do classes begin so early in the morning? Many sleep researchers, teachers, and physicians agree that delayed school start times would be better for the overall health of the students and their success in the classroom.

In this article, we will go over the various benefits of starting school later, explain the science behind how adolescents’ sleep patterns work, and provide helpful tips for parents to support their children’s healthy sleep habits.

When you get proper sleep, alertness increases and decision-making skills improve, making it easier to understand and retain new information. Implementing later start times would allow students to sleep in longer and wake up more well-rested, better prepared to take on the school day ahead.

In 2017, a 4-year study was conducted to examine the relationship between school start times and academic performance. Students were observed before and after the 1 hour and 10 minute time change was put into effect, and researchers found academic success improved significantly after pushing school start times.

Without adequate sleep, it can be difficult for students to focus in the classroom.

Ensuring your child gets at least 7 hours of sleep each night is one of the most effective ways to support their overall physical health. While we snooze at night, the body goes straight to work repairing, healing, and building its tissue and muscle. Without sufficient rest, we interfere with its ability to properly do its job. This can, in turn, result in decreased immune function and increased inflammation.

Sleep deprivation puts adolescents at a higher risk for many health-related issues including, but not limited to, Type 2 diabetes, obesity, injuries due to drowsiness, and high blood pressure. A lack of sleep can also put additional stress on the body and alter hormone levels.

By allowing students more time to sleep in the mornings, their chances of experiencing these negative effects are far less.

Sleep, and a lack thereof, directly affects mood. When children and teenagers get sufficient rest, they show an increased ability to cope with and effectively manage stress in their lives.

Comparatively, when they are deprived of sleep, they tend to experience more frequent mood swings, higher levels of irritability, and attention-behavior related problems.

In a 2018 study, researchers investigated the correlation between sleep and mental health in 690 teenagers. Their evidence concluded that those with sleep problems struggled much more with mental health problems than those who got regular, adequate rest.

Tired students will often reach for foods and drinks that are high in sugar and/or caffeine for a quick energy fix. This may lead to a crash hours later. Caffeine can also cause problems falling and staying asleep when consumed too late in the day. If students are properly rested, they’ll be far less likely to turn to these items for a pick-me-up.

Children and adolescents tend to be highly sensitive to the effects of caffeine. When consumed, it may lead to negative effects such as dehydration, heart complications, sleep disturbances, anxiousness, feeling jittery, and nausea. In fact, for these reasons, both the American Academy of Pediatrics and the Center for Disease Control recommend adolescents do not consume beverages with caffeine in them at all.

Instead of overriding their fatigue with caffeine, it’s best to address the root of it; proper rest will help to avoid students’ exhaustion during the school day.

Adequate sleep is important for proper functioning, mood, immunity, and cognition. If schools started later, this would allow students more time to sleep in the mornings, potentially diminishing daytime sleepiness.

In 2018, public schools in Seattle, Washington pushed the starting times back for middle and high schoolers by one hour. Researchers at the Univerity of Washington followed along closely by using wrist activity monitors. These measured how much sleep the students were getting each night compared to before. They found that the students did not stay up later, but slept in longer.

This evidence suggests that by starting classes later, students would have an increased amount of time to get much-needed rest.

During the transition from childhood to adolescence, sleep patterns change significantly. The body begins to secrete melatonin, a hormone responsible for sleep cycle regulation, later in the evening. Biologically, this causes teenagers to fall asleep later than children.

Melatonin is produced according to the amounts of light and dark in one’s environment. When students wake up and it’s still dark outside, it interferes with their natural internal clock. The darkness is a cue to the brain and body that it’s still night-time and therefore time for rest. This can often lead to feelings of drowsiness.

What Parents Can Do to Support Healthy Sleep

As a parent, you may be wondering what you can do to counteract sleep loss due to early school start times. Here are some ways to help make sleep a priority in your home:

Sleep hygiene refers to ones’ daily sleep-promoting habits. Having good sleep hygiene can improve your child’s quality of rest and overall health. By modeling these actions and encouraging these behaviors, your child may be more likely to fall asleep easier.

Some habits that you may want to consider putting into place are:

Having a bedtime routine is important for helping children transition from busy, engaging waking hours to relaxing sleeping ones. The body’s internal clock relies on consistency, so going to bed and waking up at roughly the same time every day promotes better sleep. By doing so, you are regulating and reinforcing the natural sleep-wake cycle.

Select a time that your child can commit to every day, even on weekends and holidays, and stick to it.

Using screens before bed can be biologically harmful. The blue light emitted from digital devices messes with sleep quality by suppressing melatonin, the hormone that makes us tired. This interferes with the body’s ability to naturally prepare itself for rest.

Aside from that, constant streams of information keep the brain actively engaged, sometimes even hours after the fact, making it much more difficult for your child to fall asleep.

To combat this, limit evening screen-time by establishing a digital curfew. This is a family rule to put away all electronic devices in the 1 to 2 hours leading up to bedtime. You may even want to take it one step further and consider leaving all devices out of the bedroom. This way, children aren’t tempted to reach for them in the middle of the night when they notice a notification pop up on the screen.

If your child seems resistant to the idea, know that this is perfectly normal and to be expected. We live in a highly interconnected, technological society that is dependent on phones, tablets, and laptops. To help them understand why you’ve implemented this change, you can explain the importance of a balanced approach when it comes to using electronics and how doing so can positively affect their sleep.

Tryptophan is an essential amino acid that’s found in food. When consumed, the brain converts it into melatonin, the hormone that is responsible for regulating the body’s sleep-wake cycle. 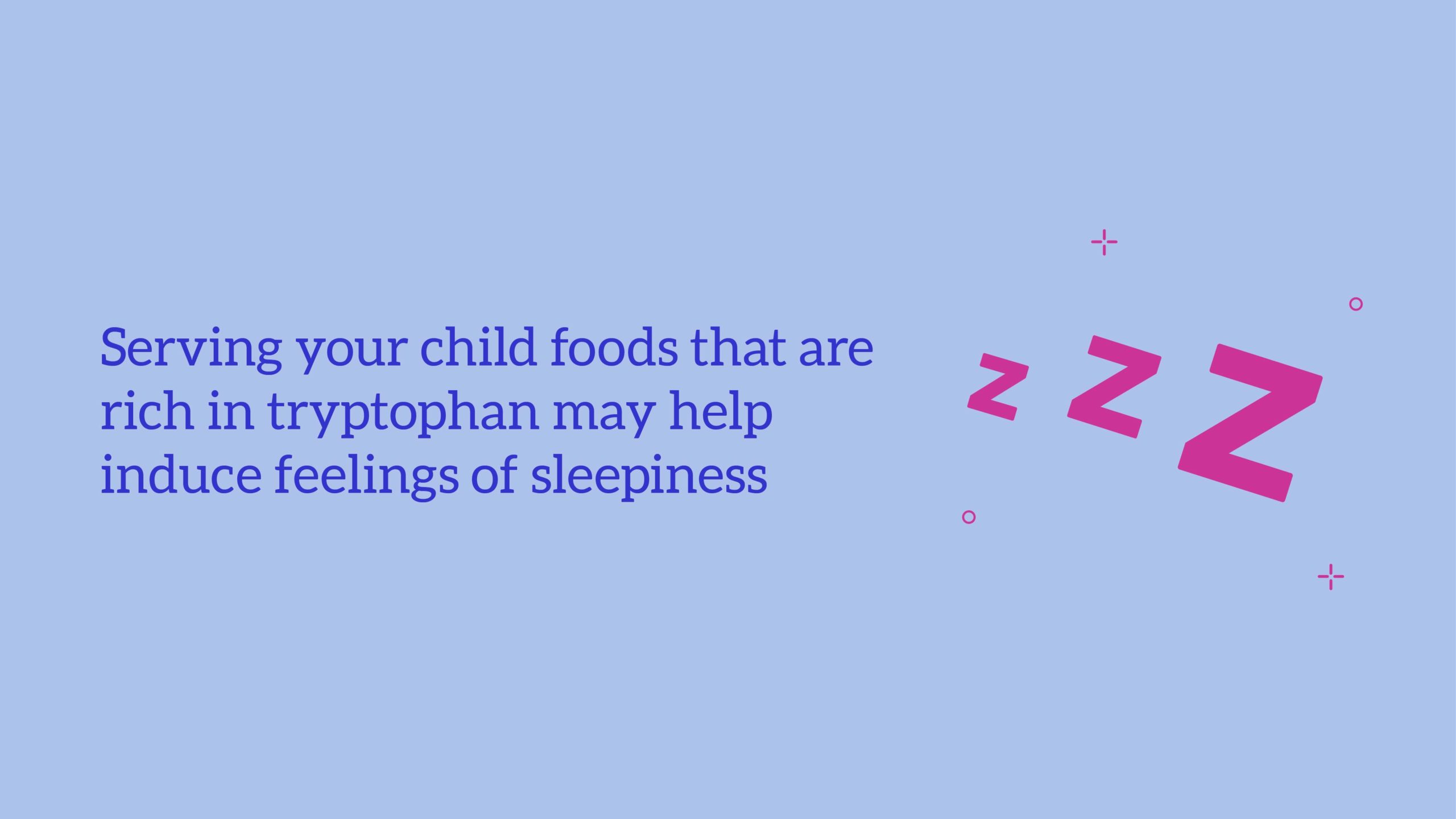 Serving your child foods that are rich in tryptophan may help induce feelings of sleepiness. You will want to serve them in the late afternoon or early evening, at least 4 hours before bed so that they can release gradually over the course of the evening.

Some good, healthy foods to have on-hand include:

Create a Calming Bedroom Environment Together

Designing a space that is conducive to sleep can positively impact sleep quality. Ideally, your child’s bedroom should be dark, quiet, and cool. This soothing combination will communicate to the brain and body that it is time to slow down and prepare for rest.

Bedding and sleepwear should be taken into consideration as well. You will want to ensure your child has a supportive mattress and pillows. Sheets made from natural fibers such as Tencel or bamboo will keep them cool overnight. Pajamas made from breathable materials like linen and cotton are great for sleeping in due to their breathable, airy comfort. They should be lightweight and loose-fitting as well.

How many hours of sleep do teenagers need?

The Center for Disease Control and Prevention (CDC) recommends that teenagers between 13-18 years old get 8-10 hours of sleep per night. On average, this age group is only sleeping around 7 hours per night, indicating a lack of adequate rest.

Insufficient sleep can negatively impact teens’ health and success in school. To prevent this from happening, parents can encourage good sleep hygiene, implement a digital curfew, and create a soothing sleep space for their child.

How many hours of sleep do children need?

According to the CDC, school-aged children between the ages of 6-12 should be getting 9-12 hours of sleep per night. At this time, about 6 in 10 middle schoolers aren’t getting enough sleep which could be wreaking havoc on their classroom performance and overall well-being.

By setting a regular bedtime routine and offering tryptophan-rich foods in the evenings, parents can help instill healthy sleep habits and improve the chances of their child getting proper rest.

Why should school start later in the day?

For these reasons, the American Academy of Pediatrics recommends middle and high schools start no earlier than 8:30 am. Few schools around the United States have committed to a time change, though.

What is a counterclaim for school starting later?

One of the most common counterclaims for later start times is that students would remain at school later in the day, therefore decreasing available time to do their homework in the evenings. It could also interfere with working hours for those who have after-school jobs, greatly reducing the amount of time they have to earn money.

Some school districts have stated that they oppose later start times because it would cause logistical issues with bus schedules, after-school activities, and sporting events.

Yes, there is a strong correlation between later start times and improved academic performance and success. This may be due to students getting more adequate, high-quality sleep which results in improved cognition and information retention.

Lack of sleep can have a negative impact on a child’s performance in school. For this reason, later start times may be in their best interest. It would allow them additional time to rest and line up more closely with the body’s biology.

If your school hasn’t caught on just yet, in the meantime, you can support your children by helping them maintain healthy sleep habits. 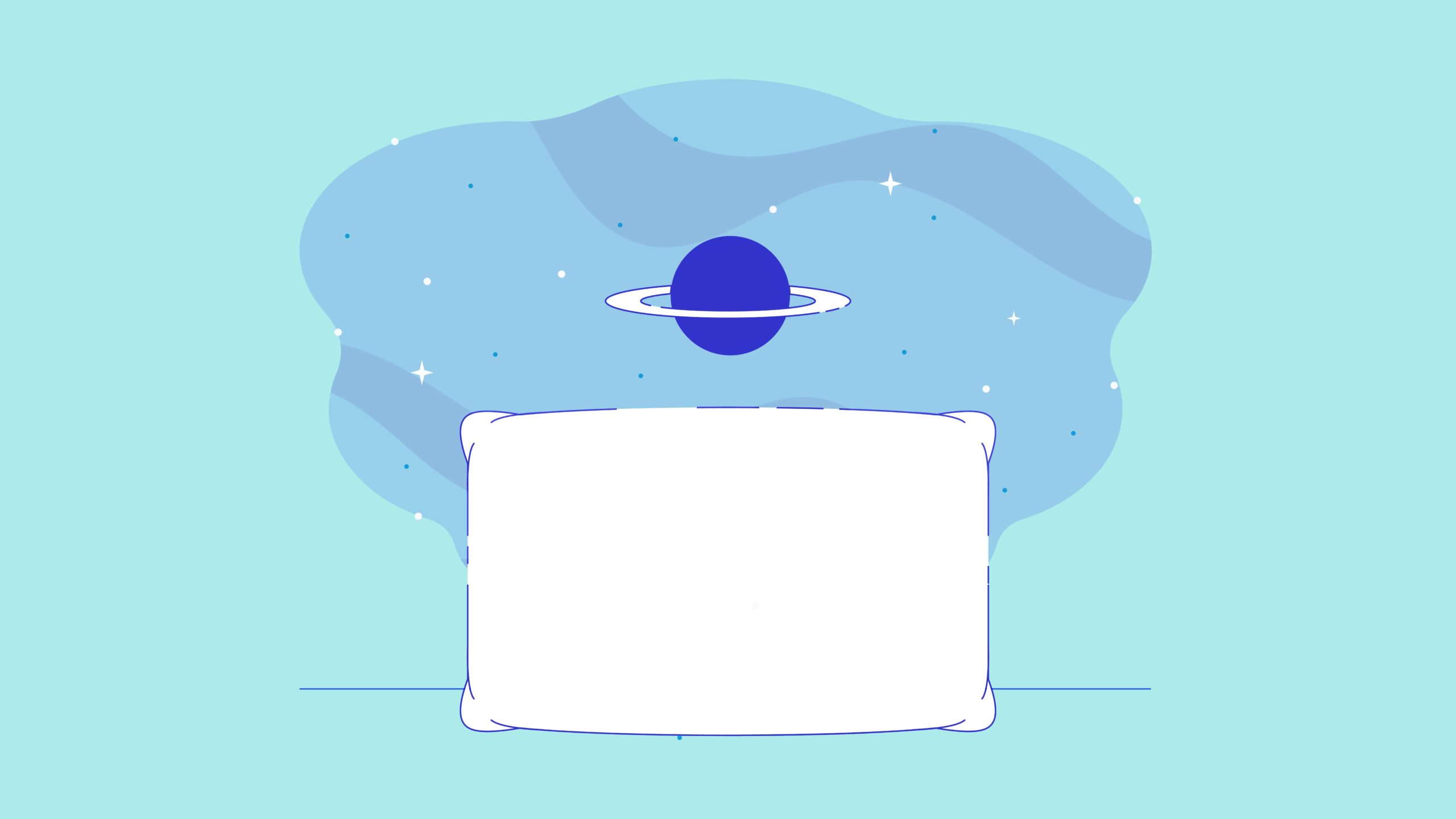 How to Lucid Dream

8 Reasons to Get the TV Out of Your Bedroom

10 Benefits of Eating Mango at Night