by Andrea Strand CERTIFIED SLEEP COACH Comment on Sleep and Job Loss: Exploring Sleep-Related Mistakes and Dismissals in the Workplace

Do you count yourself among the more than 1 in 3 Americans who are chronically sleep-deprived? If so, it may be time to take a long, hard look at your sleep habits, because your career may be buckling under the pressure of exhaustion.

You’d be hard-pressed to argue that people perform better at work with less daily rest: for starters, proper shut-eye helps you shake off distractions, avoid burnout, and improve your decision-making, all of which can be highly beneficial for those seeking success. On the flip side, if you don’t get an adequate amount of sleep, mistakes and slip-ups may begin to pile up.

To better understand the ripple effects of exhaustion on people’s careers, we surveyed 1,001 Americans about their energy levels and work performance. The bedroom and the boardroom may be more connected than you think – read on to find out how. 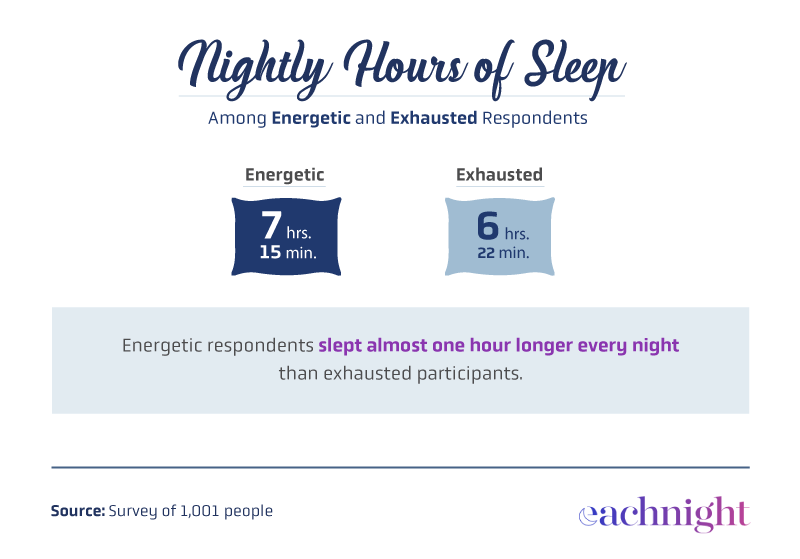 Before we jump in, it’s important to note what qualifies someone as being “energetic” or “exhausted.” The former group reported an average of 7 hours and 15 minutes of sleep every night, while the latter got less than six and a half. 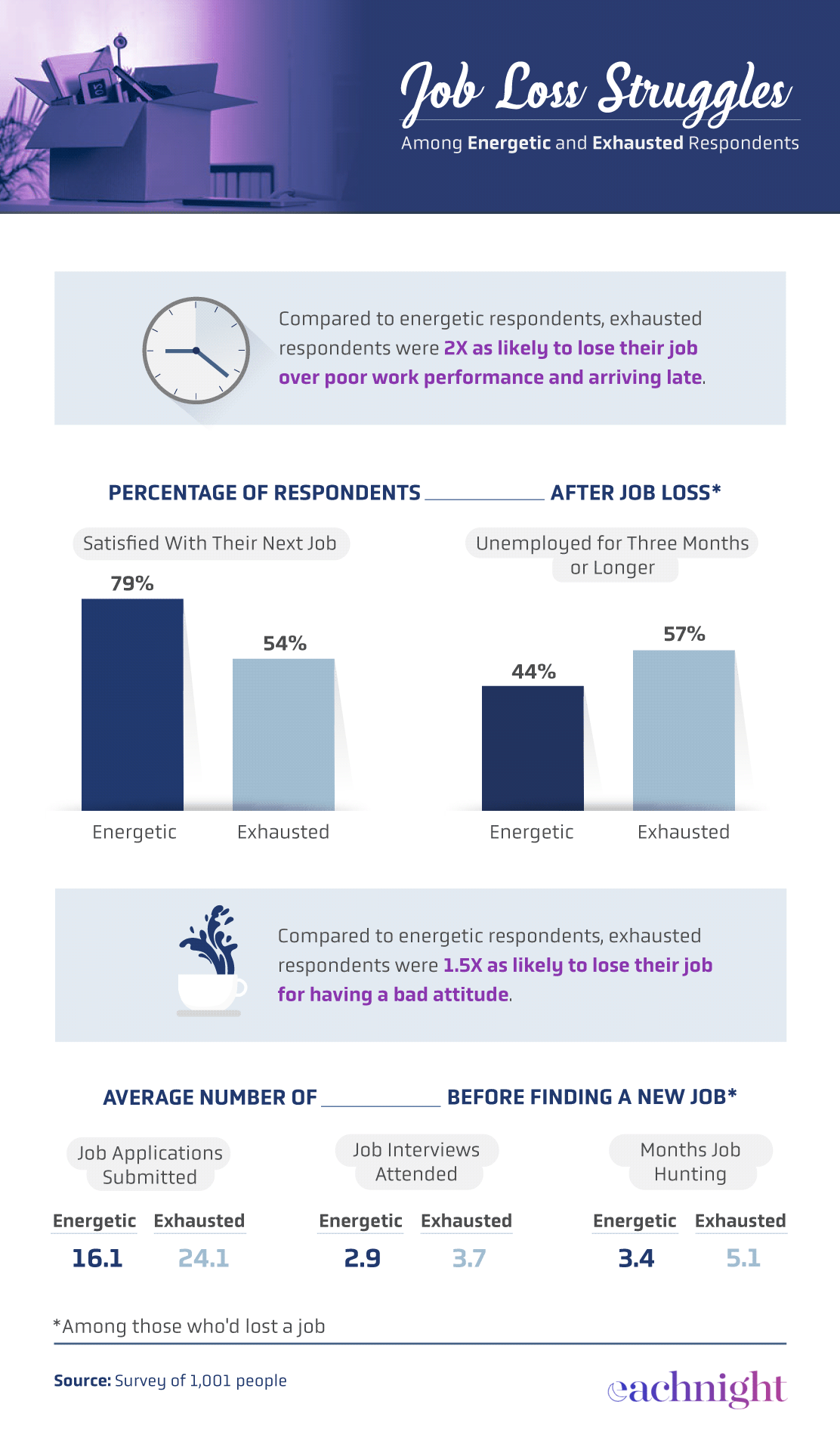 Rested minds are sharp minds, and many of our respondents’ careers suffered due to their exhaustion. People who did not get enough sleep were twice as likely to lose their job due to performance issues and arriving late to the office, and 1.5 times as likely to get fired due to a bad attitude.

In the wake of losing their jobs, well-rested respondents were in a far better position to bounce back and thrive: 79% of energetic people said they were satisfied with the job that followed their termination, compared to 54% of exhausted respondents. They were also less likely to remain unemployed for three months or longer following the loss of their job (44% versus 57%).

For context, in a 2019 report by the U.S. Bureau of Labor Statistics, the average American was unemployed for 22.1 weeks before finding a new role, or between five and six months. This was just about on par for exhausted applicants, who took an average of 5.1 months to find a new job (compared to 3.4 months for energetic applicants, who were way ahead of the BLS average).

“Even though the majority of our respondents outperform the national average, rested people were still much more likely to land a job quickly, which puts them way ahead of the curve,” said Andrea Strand, editor at eachnight. Sleep-deprived respondents also submitted more applications and attended more interviews in order to secure their new job.

It’s normal for your focus to ebb and flow throughout the day, but if you err too much on the side of distraction, your work is bound to suffer. On average, respondents who did not get enough sleep spent nearly twice as much time feeling unfocused at work every day, leading to many more on-the-job errors.

In every possible category, exhausted respondents were more likely to make mistakes at work than their energetic co-workers. For starters, they were more than twice as likely to make an error due to feelings of anxiety and fatigue. They were also more susceptible to slipping up because of stress (74% versus 42%), difficulty with multitasking (59% versus 47%), having too much work on their plate (55% versus 36%), and lack of focus (56% versus 33%).

Whether you’re chronically exhausted or otherwise, you’re bound to experience extreme fatigue at work every once in a while. To avoid making careless mistakes or setting yourself back, create your own guidelines for organization, task management, and wellness. 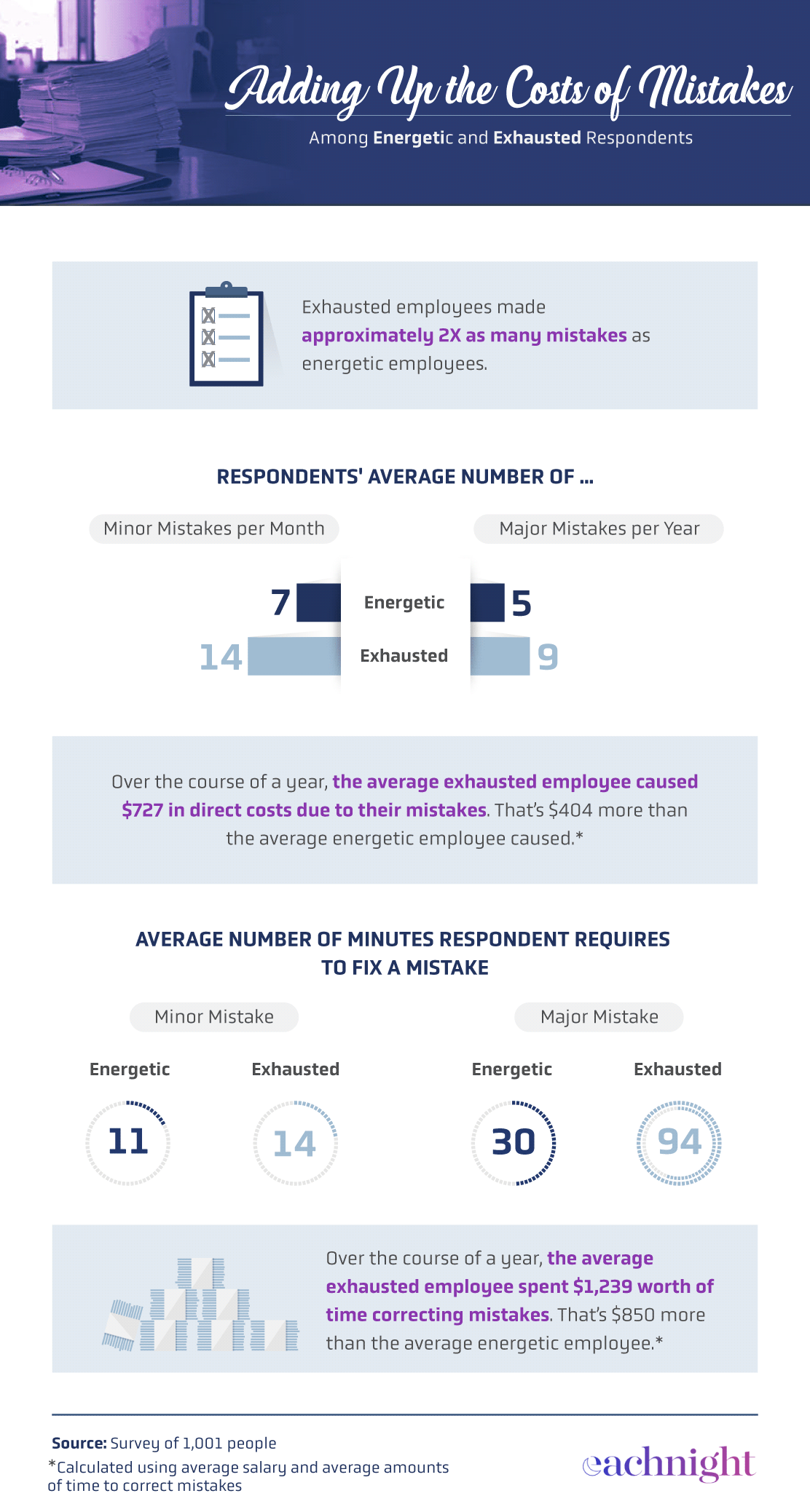 Not all mistakes are created equal: some are big, some are small. Some cost the company pennies, some can rack up thousands of dollars in damage. Either way, exhausted employees were twice as likely to make errors at work, both major and minor. “Nobody wants to cost their employer a penny more than they have to,” said Strand, “so getting a little more sleep could go a long way towards staying on your manager’s good side!”

By the numbers, tired workers racked up an average of $727 in direct costs due to their mistakes and spent $1,239 worth of time righting their wrongs. That’s $404 more in direct costs than their energetic colleagues and an excess of $850 worth of time allocated to corrections. While minor mistakes committed by exhausted employees took 14 minutes to correct (compared to 11 minutes for energetic workers), major mistakes cost them over 1.5 hours to undo (94 minutes, on average, versus 30 minutes for energetic workers).

Not only did exhausted employees make more mistakes on the job as a result of impaired focus, but their errors also took more time and money to fix than their energetic colleagues’ slip-ups. In the event of job loss, exhausted respondents were more likely to get fired for performance-related issues, and they also had more difficulty getting back on their feet.

Do yourself—and your career—a favor: visit eachnight for all things sleep, from memory foam mattress reviews to science-backed tips to get a better night’s rest. We’ve explored the best mattresses for every situation.

In many cases, questions and responses have been rephrased for clarity or brevity. These data rely on self-reporting, and strict statistical testing has not been performed on these findings. Potential issues with self-reported data include but are not limited to exaggeration, selective memory, and attribution errors on the part of respondents.

No matter how much sleep you got last night, we know you have the energy to do this one simple thing: Please link back to the original article whenever you share our content with friends, family, or colleagues. We also ask that you only share it for non-commercial purposes. Thank you! 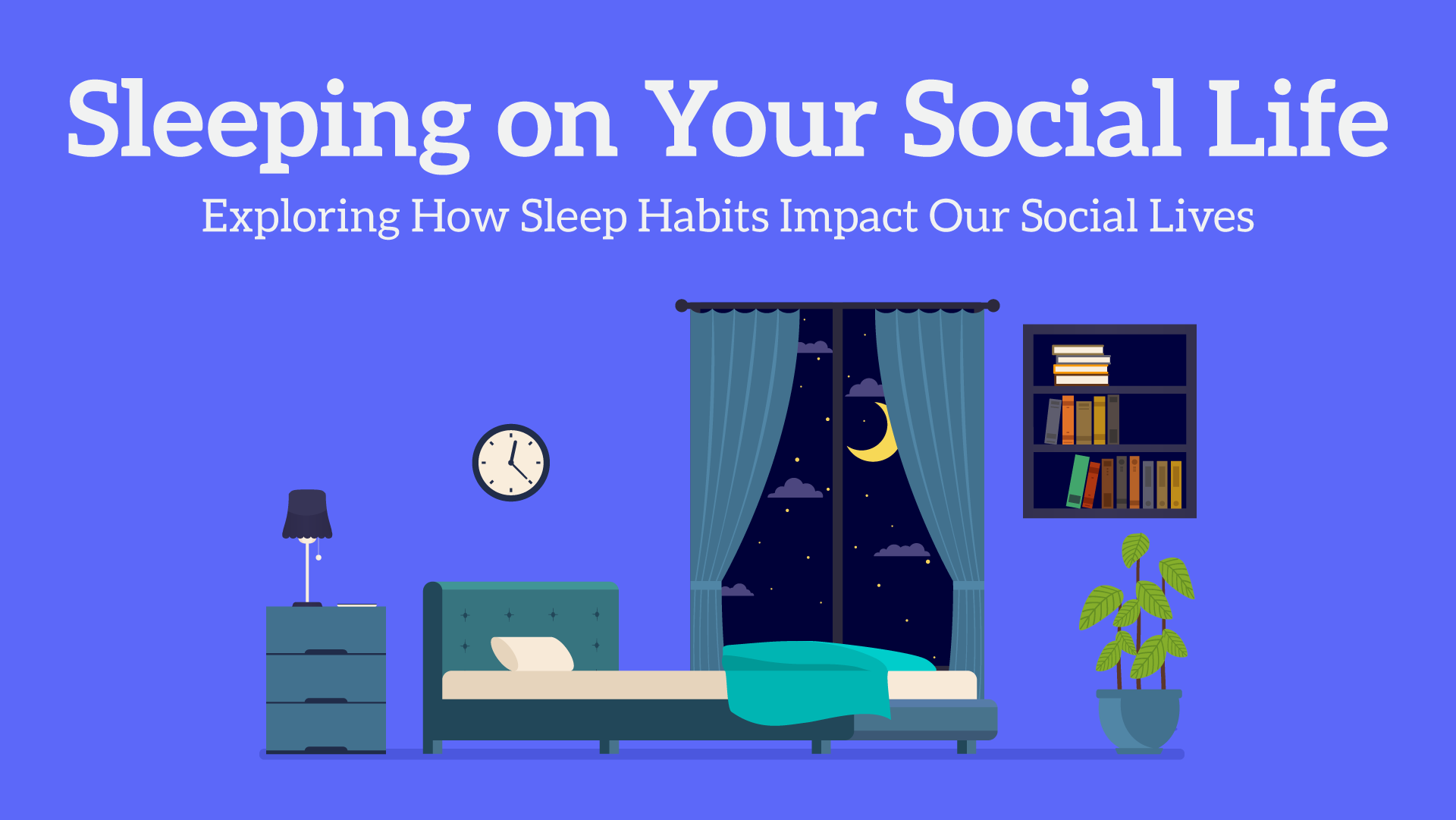 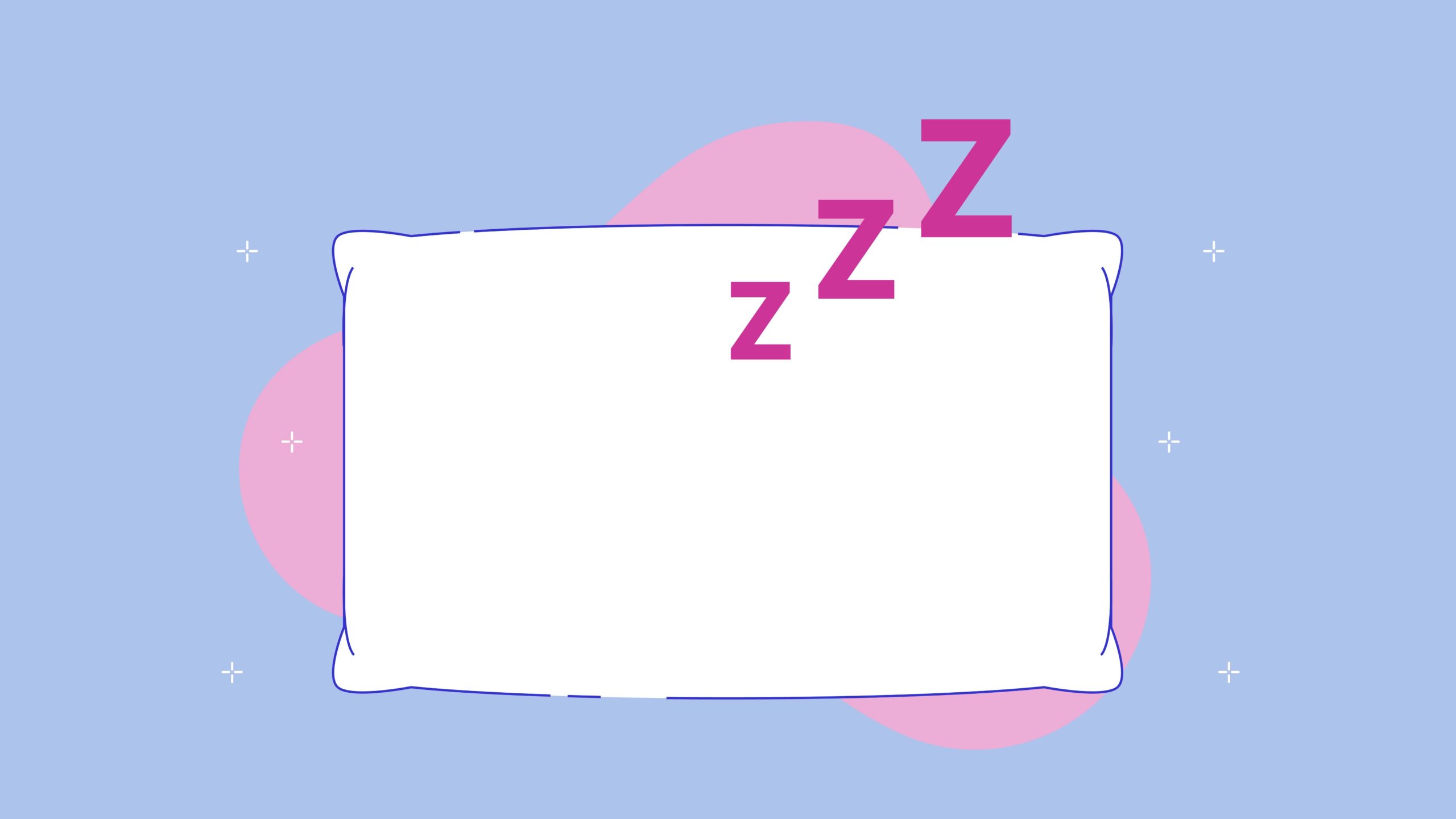 Sleepy Shoppers: What 1,000 People Reveal About Their Late-Night Purchase Habits