How Many Calories Do You Burn Sleeping?

by Jasmin Lee Comment on How Many Calories Do You Burn Sleeping?
Updated March 6, 2020

If you’re trying to find ways to burn more calories, consider your nighttime routine. Studies show mental activity comprises about 20% of your resting metabolic rate, or the calories you burn without physically moving. Your brain continues to do this while you sleep. In fact, your brain is working just as hard during REM sleep as it is while you’re awake.

So how many calories do you burn sleeping? As it turns out, there are an array of factors. In this post, we break down everything you need to know to boost the number of calories you burn each night asleep.

How Many Calories Do You Burn Sleeping?

To determine the number of calories you burn while sleeping, there are a few steps. Stay with us — there is some math involved.

The first thing to determine is your Basal Metabolic Rate or BMR. Also known as your body’s metabolism, BMR is the number of calories needed to keep your body functioning at rest.

Any time you make your metabolism work harder, your metabolic rate increases. This can happen when exercising, for example. BMR varies based on an individual’s weight, gender, and age.

When you’re sleeping, your body expels 95% of the calories needed to function at simple rest. This is where the math comes in.

First determine your daily BMR with this calculator. Since this is for a 24-hour day, divide this number by 24 for your hourly metabolic rate. Then multiply that by .95 (since your body functions at 95% of simple rest during sleep). Multiply that by the number of hours slept. And there you have it — calories burned while sleeping. Here’s the formula: 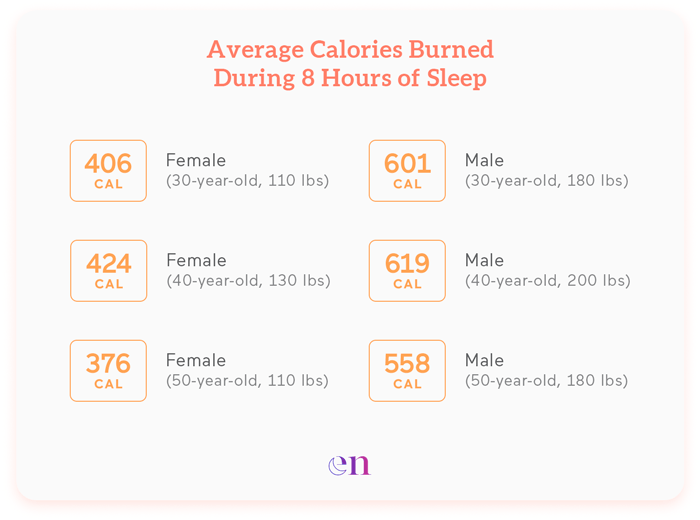 If you don’t like math, not to worry. Examining some average numbers can be a good place to start. Consider these examples for calories burned during eight hours of sleep:

As you can see, the amount of calories burned decreases with age and increases with body weight. Metabolism slows with age, so it comes as no surprise that we see a decrease in caloric burn. A larger person’s body will also burn more calories to function.

How to Burn More Calories During Sleep

As it turns out, there are a few ways to increase your calorie burn while you sleep. The first key is to get a better night’s rest. More restful sleep means more REM (rapid eye movement) sleep. This is when your brain is most active and burns the most calories. This is because your brain is burning more oxygen when it’s working hard during this deep sleep.

How to Get More REM Sleep

We all know that a better night’s rest is important for body function, mental health, and even weight loss. More deep REM sleep can lead to burning extra calories while you sleep. Here are a few tips to improve sleep quality:

Turn Down the Thermostat

Another way to burn more calories during sleep is to turn down the thermostat or sleep in light pajamas. Cooler temperatures will force your body to work a little harder to stay warm.

In a study led by Dr. Francesco Celi of Virginia Commonwealth University, a group of five healthy male subjects slept in rooms of varying temperatures for one month each. Rooms were 75 °F the first month, followed by 66 °F for the next month, and finally 88 °F. During the coldest month, participants saw a 10% increase in metabolic activity.

According to a recent study, 68°F is an ideal sleeping temperature.

That said, you might not get a good night’s sleep if you’re uncomfortably cold, so don’t freeze yourself out. According to a recent study, 68°F is an ideal sleeping temperature.

Exercise is important to maintaining a healthy body weight, and it can improve your sleep quality. That said, it won’t actually help you burn more calories while you’re sleeping.

Sleep and Your Health

Now that you know better sleep will help you burn more calories while you rest, it’s no surprise that the opposite is also true. A Cleveland study examined 3055 men and 3052 women between the ages of 67 and 96 and 70 and 99, respectively.

Short sleep was also associated with increased body fat. Plus, people who are chronically sleep-deprived are more likely to be overweight, have cardiovascular disease, strokes, infections, and even some types of cancer compared to those who get enough sleep.

In turn, sleep disturbances are more common among those suffering from age-related neurological disorders like Parkinson’s and Alzheimer’s disease. Researchers aren’t sure yet which comes first — disorders leading to loss of sleep or loss of sleep leading to disorders.

Bottom line: Your body needs a good night’s sleep to function properly. If you’ve tried tips for improving your sleep and still can’t get enough shut-eye, you may have a sleep disorder.

Consult your healthcare provider if you have persistent sleep deprivation. They may recommend a polysomnogram, or sleep study. It will collect data like your oxygen levels, breathing, limb, and eye movements. These results can help doctors develop a treatment plan or suggest further testing.

We’ve done the math, and people can burn anywhere between 300 and 700 calories each night. To increase this number, try sleeping in a cool dark room around 68 degrees. This will help you burn more calories to maintain your body temperature.

Physical activity during the day can also help you sleep better at night. You burn the most calories during REM sleep, so the more deep sleep, the more calories you’ll burn.

Lack of sleep, on the other hand, can lead to weight gain and even other health issues such as cardiovascular disease and cancer. If you’re struggling to get those eight hours each night, try keeping to a regular sleep schedule and limiting electronic and television use before bed. If this still doesn’t work, consult your doctor to see if you are suffering from a sleep disorder.