How Long Can You Go Without Sleep?

by Kiera Pritchard Comment on How Long Can You Go Without Sleep?
Updated February 28, 2020

While most people dream of clocking the required 7 to 8 hours of sleep a night, it’s not always possible. Work, social obligations, and a new TV series can take you off your sleep schedule.

Once you’re off a sleep schedule, it can be extremely hard to get back on; one late night turns into two, and then three. Before you know it, you’re running on fumes and triple shots of espresso.

These are not the kind of questions you want to find the answers to through personal experience. But it’s good to know just how important sleep is, and what will happen if you don’t get in the hours you need.

In our post, we take you through what happens to your brain and body the longer you go without sleep.

What Is Sleep Deprivation?

Try telling a friend or colleague you weren’t able to sleep well last night. How did they respond? With a knowing nod? With their own sleepless story?

Unfortunately, these days, not getting enough sleep is nothing new. Commonly referred to by the term “sleep deprivation,” there is no exact measure for what constitutes a lack of sleep. Basically, someone is considered sleep deprived when they get less sleep than what they need to function normally.

Of course, sleep needs vary from person to person. Toddlers need 11 to 14 hours of sleep each night, pre-teens and teenagers need 9 to 10, and adults require 7 to 9 hours. The amount of sleep you need is also determined by factors like activity levels and genetics.

So rather than basing sleep deprivation on a specific number of hours or days, it is best to look out for these symptoms:

These are symptoms of acute sleep deprivation, which is essentially one long bout of staying awake. Chronic sleep deprivation, on the other hand, is when you don’t get much sleep at night for extended periods of time. Common cases include insomnia, sleep apnea, or fatal familial insomnia (FFI). These are more severe conditions — the person doesn’t want to stay awake, but for some reason, can’t seem to fall asleep.

What Happens After 24 Hours of Being Awake 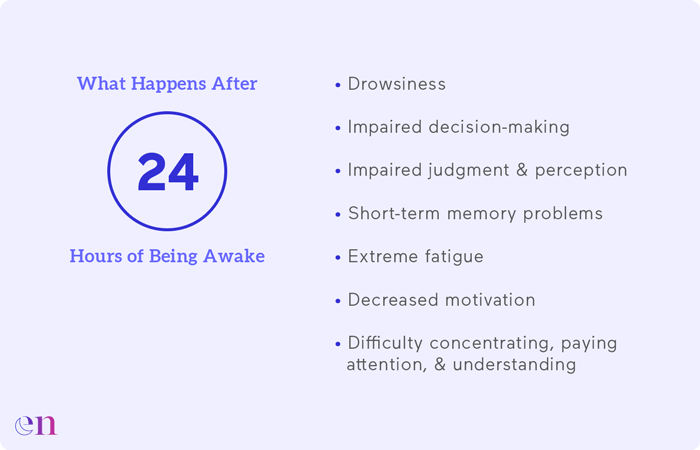 Let’s go over the symptoms of acute sleep deprivation in chronological order, breaking down what happens as your waking hours go on.

Staying awake for 24 hours is actually somewhat common. A lot of people pull “all-nighters” when rushing to make a deadline, cramming for a test, or attending to something unexpected (i.e., sick family member, personal emergency).

While many of these cases are unavoidable — and even give a sense of accomplishment — they do come with some morning-after effects. You’ll usually begin to feel these effects at the 16-18 hour mark of being awake. And they only get worse with every succeeding hour.

The brain functions and memory are the first things affected by a lack of sleep. As your brain becomes slow and sluggish, concentration fades, reaction time slows down, and attention span diminishes. Things like decision-making and problem-solving are nearly impossible.

You will also have a harder time remembering things or even forming new memories, because your brain is already struggling to get through the day. This lapse is why many people have trouble recalling what happened when they were sleep-deprived.

Experts believe the brain goes into a state of “local sleep” when trying to conserve as much energy as possible. Local sleep is when some parts of the brain briefly turn off, even while the person is still very much awake. This disconnect helps explain the significant decrease in cognitive ability.

What Happens After 36 Hours of Being Awake 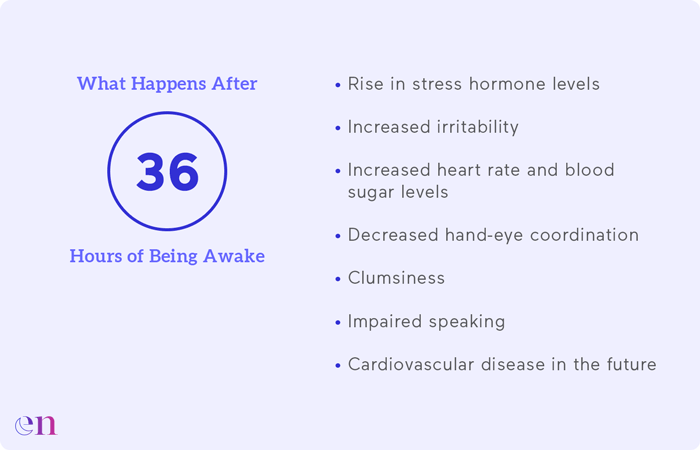 Past the 24-hour mark of being awake, the effects start to go beyond just brain drain. Your body will also slow down, making you clumsy, uncoordinated, and more likely to commit errors in even the simplest tasks. Things like forgetting to lock the car or repeating yourself are typical when you haven’t gotten any sleep.

Your hormones will also have trouble maintaining balance. Faced with added stress, the body responds by pumping cortisol into your bloodstream. Cortisol is the primary stress hormone, which works to raise your heart rate and blood pressure. This is known as our natural “flight or fight” response, and is very handy in emergencies, after which cortisol levels quickly return to normal.

It’s not, however, meant to stay raised for prolonged periods of time. And when it does, we end up unable to handle the added stress and becoming highly emotional and irritable.

The effects of not sleeping for 36 hours can include:

What Happens After 48 Hours of Being Awake 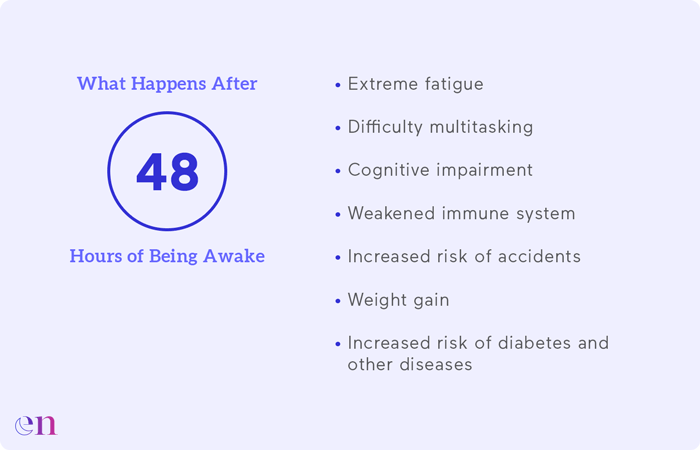 After two days of being awake, you will start looking for just about any way to fall asleep. As your body naturally tries to help itself, during periods of idleness, you may just doze off.

These can be quick naps or long snoozes. Or, they can be something called “microsleeps.” Microsleeps are fleeting moments of sleep, or a sleeplike state, lasting anywhere from 1-30 seconds. They are involuntary and occur frequently throughout the day, even if you’re in the middle of an activity.

Not only does this make microsleeps dangerous in themselves — a lot of things can happen during 30 seconds of unconsciousness — they also leave the person in a disoriented state when they wake up.

Imagine going through these random episodes while in a meeting, on a conference call, or driving. These are all everyday scenarios, made dangerous by the lack of sleep.

Aside from these split-second naps, your body will have difficulty regulating its internal functions as well. You’ll experience a dip in both body temperature and metabolism. And when coupled with constant snacking (often used to boost energy throughout the day), frequent spells of going without sleep can lead to weight gain and an increased risk of diabetes.

Ultimately, your entire immune system will be compromised, as your body starts shutting down and becoming more vulnerable to bacteria and viruses. By this point, sleep is becoming increasingly crucial.

A few signs of going without sleep for 48 hours include:

What Happens After 72 Hours of Being Awake 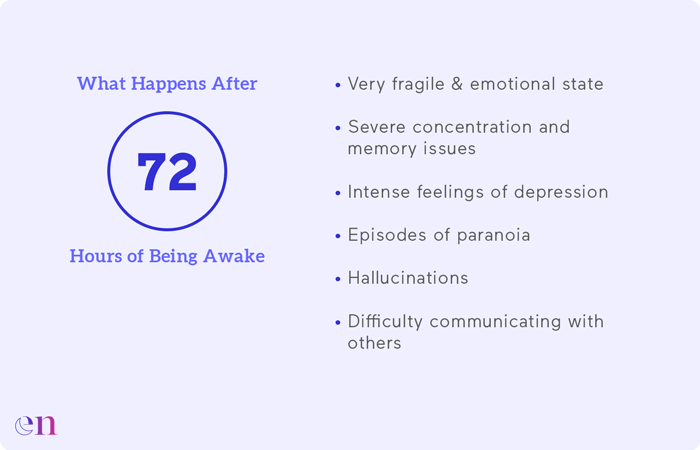 If you’re going on your third day without sleep, you may not even be completely aware of what’s going on.

With a mix of impaired functions, tumultuous emotions, and uncontrollable microsleeps, your days start to feel far from normal.

In addition to all the previous symptoms, you will now be in a very fragile mental and emotional state. What were bursts of short temper and irritability just a couple of days ago have now become feelings of depression and paranoia.

Without its much-needed rest, the brain becomes chemically imbalanced and starts playing tricks on you. It’s common to suffer altered perceptions and hallucinations, such as thinking a lamp post is a person or a spoon is a pen.

All these make it impossible for you to communicate with others or even function properly. So the task you’re staying up for, whether a project, test, or event, is highly unlikely to be accomplished the way you envisioned.

Being up for 72 hours can lead to:

How Long Can You Go Without Sleep? An Extreme Sleep Deprivation Case

The longest world record for going without sleep is about 264 hours, or a little over 11 days, made in 1964. The title-holder Randy Gardner, who was an 11-year-old high school student at the time, recalls feelings of nausea, difficulty concentrating, and lapses in memory.

There have been many other cases of people going without sleep. However, a few days seems to be the most common length. And although the time spent without sleep is far from pleasant, the symptoms of prolonged sleep deprivation will usually go away as soon as you get enough rest.

As much as possible, try to go back to a normal sleep schedule. This may be difficult at first, as your sleep-wake cycle has been severely disrupted. But you should be able to readjust and return to your normal functions after a few days. Improving sleep hygiene habits and sticking to a consistent bedtime routine can help you consistently get rejuvenating sleep.

There’s a reason your brain and body naturally tires and ushers you into bed. Without the right amount of sleep every night, it becomes increasingly difficult to do the things we need during the day. A day or two of sleep deprivation can leave you feeling dazed and drowsy, but any longer can lead to episodes of intense paranoia and increased risks for long-term disease.